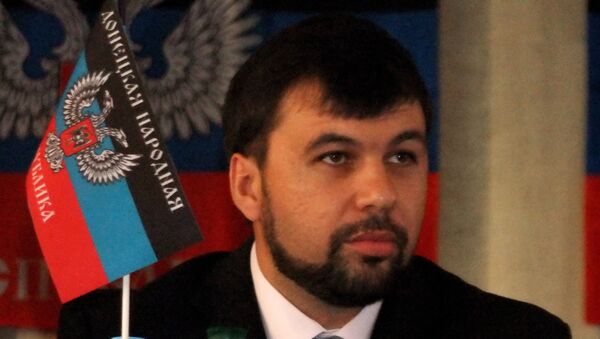 © Sputnik / Igor Maslov
/
Go to the photo bank
Subscribe
DPR negotiator Denis Pushilin said that the self-proclaimed Donetsk People's Republic cannot guarantee the security of Organization for Security and Co-operation in Europe monitors in the Ukrainian town of Debaltseve because of continuing shelling.

MOSCOW (Sputnik) – The self-proclaimed Donetsk People's Republic (DPR) cannot guarantee the security of Organization for Security and Co-operation in Europe (OSCE) monitors in the Ukrainian town of Debaltseve because of continuing shelling, DPR negotiator Denis Pushilin has announced.

"It would be inappropriate to talk about guaranteeing security for the OSCE mission, the situation needs to be resolved in full, more seriously, decisions on a higher level are needed," Pushilin told the Rossiya-24 TV channel.

The negotiator stressed that Debaltseve remains a hot spot of confrontation, because Kiev forces continue to fire at independence supporters.

"While basically along the entire line of contact the ceasefire is actually in force, in the Debaltseve area our militia cannot be just a target and not open return fire, despite the fact that ceasefire orders have been given," Pushilin explained.

Debaltseve is among several locations in southeastern Ukraine where hostilities intensified in the first few weeks of 2015 and are still ongoing, despite the ceasefire, which came into force on February 15.

On February 14, DPR head Alexander Zakharchenko, said that the militia would cease fire everywhere except for the inner areas of the Debaltseve territory under their control and all attempts by Kiev soldiers to leave the Debaltseve encirclement would be halted.

Meanwhile the leaders of Ukraine, Germany, France and Russia have stressed in a phone conversation that the Minsk ceasefire must cover all of southeastern Ukraine, including Debaltseve.