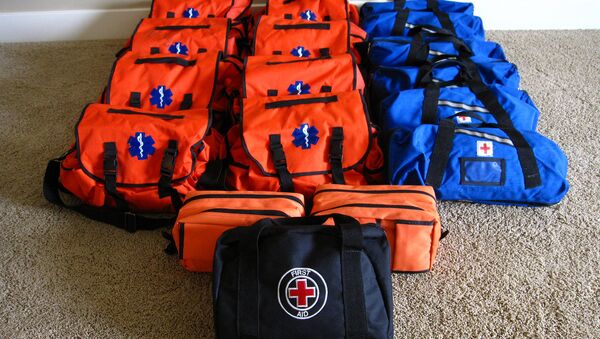 Andrej Hunko from Die Linke party said that German parliamentarians are planning to deliver humanitarian aid to eastern Ukraine within the next three to four weeks despite the fact that Kiev has not responded to their request.

MOSCOW (Sputnik), Daria Chernyshova — German parliamentarians are planning to deliver humanitarian aid to eastern Ukraine within the next three to four weeks despite the fact that Kiev has not responded to their request, Andrej Hunko from Die Linke party told Sputnik news agency Tuesday as he returned from the crisis-hit area.

“We will make a new delivery in the next weeks,” Hunko told Sputnik, adding that the leftist party will work out the details of the next delivery of medical supplies as early as next week.

Last week, Hunko and Wolfgang Gehrcke, both members of the German parliament for Die Linke party, travelled to eastern Ukraine, via the Russian city of Rostov-on-Don, where they purchased basic medicines needed in the hospitals in eastern Ukrainian cities of Donetsk, Luhansk and Horlivka.

Russian Humanitarian Aid to Ukraine Reaches Donetsk, Luhansk - Ministry
In an interview with Sputnik, Hunko stressed they had raised 70,000 Euro (about $80,000) in Germany to help those in need in eastern Ukraine.

“We gave now medicaments worth 40 000 Euro, 2.5 million Roubles – it is half of what we gathered from the people here,” Hunko said, adding that they previously arranged four trucks to deliver 7 tons of medicaments to eastern Ukrainian regions.

Two trucks were sent to Horlivka, one in Donetsk and one in Luhansk on Saturday.

When arranging the delivery of humanitarian aid to eastern Ukraine, Die Linke addressed the Kiev government asking for their assistance with the mission. The German foreign ministry told the party it could not help them pass the frontline, Hunko said.

“We are not a humanitarian aid organization, we are just two MPs,” Hunko told Sputnik. “We expected this, though officially we tried all possible ways – we asked the ambassador here in Germany – we got no reply, we asked the German foreign ministry to give us protection to go there, and they said they had no such possibility. Then we informed German foreign ministry, [German Foreign Minister Frank-Walter] Steinmeier, that we go to Rostov on Don. They wished us luck.”

According to the UN human rights office, 5,665 people have been killed in the conflict in southeastern Ukraine since last April, when Kiev launched a special operation in the region. The region is now facing a humanitarian crisis.

On February 12, the leaders of Ukraine, Germany, Russia, and France worked out a ceasefire between Kiev forces and pro-independence fighters. The warring sides must now exchange all prisoners and establish a buffer zone in the conflict area.