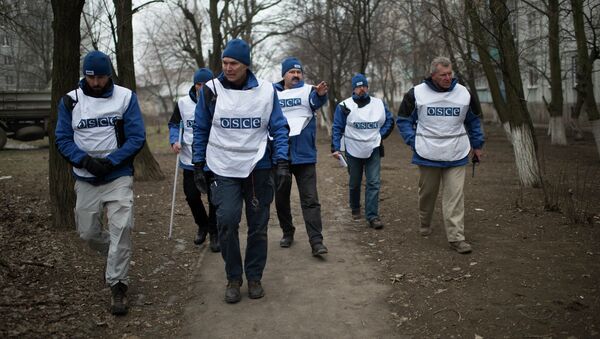 OSCE Report Says Ceasefire in Donbas Observed Except for Debaltseve
MOSCOW, (Sputnik) — The OSCE Special Monitoring Mission to Ukraine (SMM) has observed the withdrawal of Kiev forces' military vehicles from the line of contact in eastern Ukraine, the mission said in its daily report published Tuesday.

"The SMM on two occasions observed Ukrainian Armed Forces military vehicles moving away from the line of contact," the report reads.

The withdrawal of heavy artillery is one of the provisions stipulated by the agreement worked out by the leaders of Russia, Ukraine, Germany and France on February 12.

Some 5,000 Kiev Troops Blocked in Debaltseve, Hundreds Surrender – Donetsk
The agreement was then signed by envoys from Kiev, the Donetsk and Luhansk people's republics (DPR and LPR), Moscow and the OSCE.

Earlier on Tuesday, deputy commander of DPR militia Eduard Basurin said that the DPR militia was ready to withdraw artillery from areas along the line of contact where Kiev forces observed the ceasefire. LPR leader Igor Plotnitsky said that the republic began pulling back its heavy artillery on Monday evening.