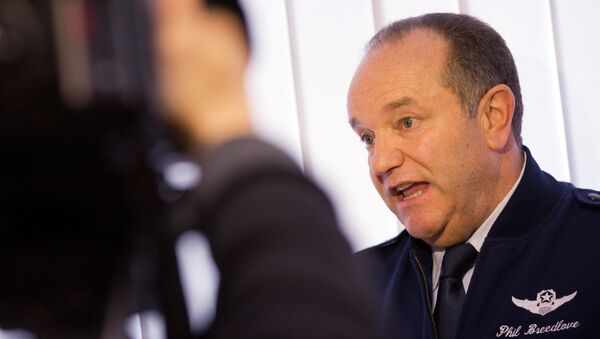 Concerned by the situation in #Ukraine as separatists refuse to observe cease-fire in Debaltseve & deny #OSCE access http://t.co/Omw3aEzIU8

The chief of the special Organization for Security and Co-operation in Europe (OSCE) mission to Ukraine stated Sunday that the independence supporters barred the organization’s monitors from accessing Debaltseve. Several thousand Kiev troops remain in the city.

Igor Plotnitsky, the leader of the self-proclaimed Luhansk People's Republic, told RIA Novosti that he met a team of monitors Monday when he visited areas in the vicinity of the frontline in eastern Ukraine.

Donetsk Ready to Release Encircled Kiev Troops if They Lay Down Arms
"Yesterday I saw their vehicles near Alchevsk, some 15 kilometers from the frontline. No one told me anything. I did not talk to them, no one talked to me or made any statements," he said.

Earlier Tuesday, Kiev said about 2,000 of its soldiers are surrounded in Debaltseve.

Last week, the leaders of Russia, Ukraine, France and Germany reached a ceasefire deal in Minsk. Under the agreement, the warring sides must respect the ceasefire starting February 15, while the OSCE must closely monitor the truce.

Since Sunday, both Kiev and the independence supporters reported a number of violations, but said the truce was generally holding.