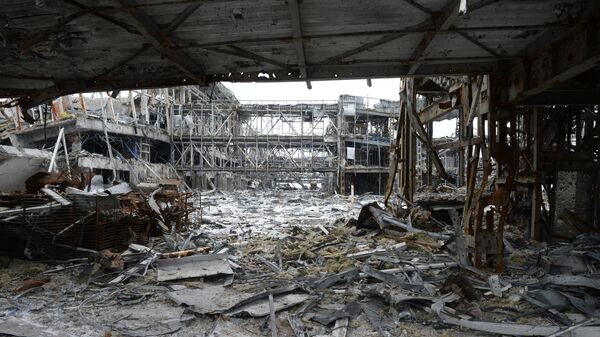 RT correspondent Murad Gazdiev and two cameramen — Pavel Klimov and Sam Henderson — came under fire at the Donetsk airport. As they stepped onto the runway that serves as an improvised border between the positions of anti-Kiev militia and Ukrainian forces, they heard mortar fire and shells started exploding near them, RT website reports. "Everywhere we went, the shells were falling. I'm not saying they were targeting us, but it looked that way," Gazdiev said on air.

Just came under #Ukrainian mortar fire in #donetsk airport. Seemed to be targeting us. Footage on RT. everyone fine pic.twitter.com/TuZwt8wUaX

The strategically important Donetsk airport has long been a hot spot for fighting between Kiev-led forces and local militia. The two warring sides agreed on a renewed ceasefire deal over the weekend.

Earlier, the same team came under sniper fire when they traveled to the town of Uglegorsk, located about 14 kilometers away from the main battleground of Debaltseve.

The town of Debaltseve, located between Ukraine’s two breakaway regions of Donetsk and Luhansk, has in recent weeks become a hot spot for heavy fighting between Kiev-led troops and local militia.