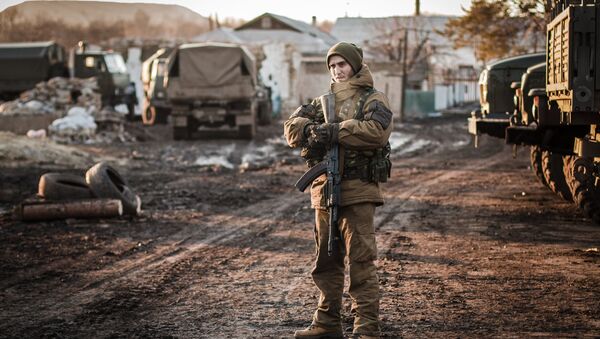 "If there is an advance [by Kiev forces], then we will surely respond likewise, if they return their [heavy artillery], then we will, too," Plotnitsky told RIA Novosti by telephone.

The withdrawal of heavy artillery from the contact line in eastern Ukraine was agreed upon at the February 12 Normandy format talks in Minsk between the leaders of Ukraine, France, Germany and Russia. Under the deal reached by the international mediators, Kiev forces and independence supporters also agreed to cease fire starting from Sunday and swap all prisoners.

"We started pulling back yesterday. Heavy artillery has already been pulled back from Debaltseve, and today this will continue," Plotnitsky said.

According to the Luhansk Information Center, Plotnitsky also stated that several thousand Ukrainian troops have been completely surrounded in the town of Debaltsevo by eastern Ukrainian forces.

Not a Single Shot: Kiev Reports Complete Ceasefire in Luhansk
"We have a full block, Debaltseve is surrounded. Ukraine cannot and doesn’t want to admit this. Everything that is going on there, and there is plenty going on, is currently located on our internal territory," Igor Plotnitsky was cited by the Information Center as saying.

Debaltseve, located between Ukraine’s two breakaway regions of Donetsk and Luhansk, is one of a number of towns in the region that has witnessed a surge of violence since the beginning of 2015, as the clashes between Kiev forces and Donbas independence fighters intensified.

Thousands of Ukrainian servicemen are reportedly surrounded in Debaltseve, and civilians are being evacuated from the area.

Monitors from the Organization for Security and Co-operation in Europe (OSCE) said Sunday that they were not allowed to visit Debaltseve. However, Donetsk People's Republic's (DPR) representative Denis Pushilin said that the monitors had not requested permission to visit the area.

According to UN estimates, more than 5,600 people have died as a result of the armed conflict in Ukraine since its start in April 2014.