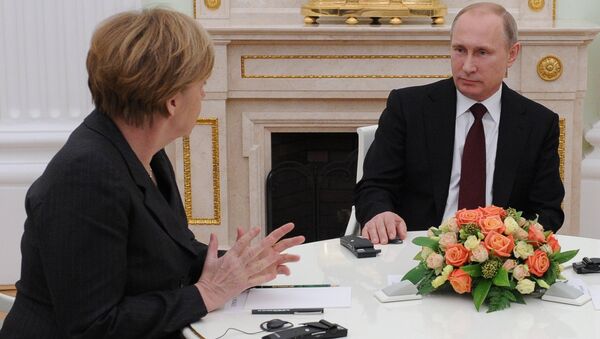 MOSCOW (Sputnik) – The leaders of Russia, Germany and Ukraine have held telephone talks discussing the situation in southeastern Ukraine (Donbas) and the role of the Organization for Security and Co-operation in Europe (OSCE) in ensuring that the Minsk ceasefire agreements are fulfilled.

"The issues pertaining to the ceasefire, the withdrawal of heavy weaponry by the conflicting sides, as well as the situation in the region of the city of Debaltsevo were touched upon [during the telephone talks]," the Kremlin press service informed early Tuesday night.

According to the press service, Russian President Vladimir Putin, his Ukrainian counterpart Petro Poroshenko and German Chancellor Angela Merkel also exchanged their views on the role of the OSCE Special Monitoring Mission (SMM) in the Ukraine peace process.

Also Putin, his Ukrainian counterpart and Merkel have agreed to maintain contact in various formats in order for the Minsk agreements on Ukraine to be implemented.

Ambassador Hopes Putin, Hollande, Merkel Talks Can Alleviate Ukraine Crisis
"It has been agreed to continue to maintain contact with the aim of contributing to the fulfilment of the Minsk agreements," the Kremlin press service said.

Last week, the leaders of Russia, Germany, France and Ukraine held Normandy format talks, which led to a ceasefire agreement between Kiev forces and independence fighters in southeastern Ukraine.

Fighting in southeastern Ukraine started in April, 2014 when Kiev launched a military operation against independence supporters in the Donetsk and Luhansk regions, who refused to recognize the new coup-installed government.

In September, a ceasefire agreement was reached between the two sides at a meeting of the Contact Group on Ukraine in Minsk. The truce failed to hold and clashes continued to take place in Ukraine's southeast, leading to heavy civilian casualties.

According to the latest UN estimates, over 5,600 people have died as a result of the Ukrainian conflict.