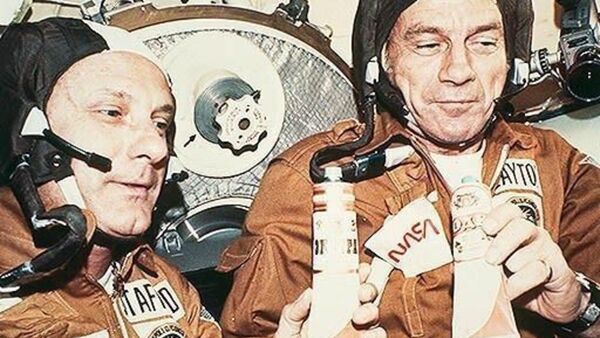 © East News / AKG Images
Subscribe
It gets lonely in space if you're a foodie. However, some cosmonauts and astronauts found ways to deal with the problem by bringing their own, or turning to Earth for help.

On Monday, Russian cosmonauts surprised their mission control when they requested 15 packages of mayonnaise to be sent in the upcoming shipment of food to the International Space Station (ISS) instead of lemons and tomatoes. However, it is not very unusual, as cosmonauts and astronauts often spend months in space, restricted to only several foods day-in and day-out.

Italian astronaut Samantha Cristoforetti brought an espresso with her to the International Space Station (ISS) in November 2014. American astronaut John Young, who later went to the Moon, challenged some safety protocols when he ate a corned beef sandwich that he snuck in to orbit in 1965.

However, nothing can beat Canadian Astronaut Chris Hadfield's space kitchen aboard the ISS, which he used to prepare burritos, gourmet pasta and whatever else he could get his hands on with Mythbusters' Adam and Jamie guiding his mission from Houston.

A heated argument is whether cosmonauts and astronauts "booze up" in orbit. A leading researcher at the Institute of Biomedical Problems who took part in preparing cosmonauts for the Salyut-7 space station in the 1980s told Rossiyskaya Gazeta in 2007 that it was an unofficial part of the protocol to pack a "special sauce" for the mission as the "psychological pressure" that builds up when three people spend a months together in a confined environment requires a release.

Yes, there was cognac in space. Back in the day, the decision whether or not to allow sending cognac to space was discussed even at the level of a board at the Ministry of Health…. Academician Gazenko told us then: "In orbit, people have a very difficult emotional state. If before sleep, the guys drink 5-7 grams of cognac, I support it."… On board we had a tube with 125 grams of cognac which said "coffee."

Cosmonaut Aleksandr Serebrov, who spent over 113 days on the Salyut-7 in 1982, and a total of over 373 days in space and holds a world record for time on spacewalks, told Novaya Gazeta in 2000 that alcohol not only played a role in releasing personal tensions, but also nucleotides from harmful space radiation.

30 grams is enough because of increased blood flow to the brain as blood vessels expand in zero gravity. 40 grams work the way 100 would back on Earth.

Why Did Russian Cosmonauts Carry Shotguns and Machetes in Space?
Although the United States pioneered bringing sherry to space during the Skylab mission in 1971, American astronauts have been much more conservative in comparison to their Soviet colleagues. When Patrick Baudry, a French astronaut, snuck a bottle of wine with him on the 1985 Space Shuttle Discovery mission, Commander Daniel Brandenstein allegedly banned him from opening it. In 2007 NASA launched a comprehensive review of its pre-flight protocols when it discovered that astronauts drank prior to flights at least two times before missions.
Newsfeed
0
New firstOld first
loader
LIVE
Заголовок открываемого материала
Access to the chat has been blocked for violating the rules . You will be able to participate again through:∞. If you do not agree with the blocking, please use the feedback form
The discussion is closed. You can participate in the discussion within 24 hours after the publication of the article.
To participate in the discussion
log in or register
loader
Chats
Заголовок открываемого материала
Worldwide
InternationalEnglishEnglishMundoEspañolSpanish
Europe
DeutschlandDeutschGermanFranceFrançaisFrenchΕλλάδαΕλληνικάGreekItaliaItalianoItalianČeská republikaČeštinaCzechPolskaPolskiPolishСрбиjаСрпскиSerbianLatvijaLatviešuLatvianLietuvaLietuviųLithuanianMoldovaMoldoveneascăMoldavianБеларусьБеларускiBelarusian
Transcaucasia
ԱրմենիաՀայերենArmenianАҧсныАҧсышәалаAbkhazХуссар ИрыстонИронауОssetianსაქართველოქართულიGeorgianAzərbaycanАzərbaycancaAzerbaijani
Middle East
Sputnik عربيArabicArabicTürkiyeTürkçeTurkishSputnik ایرانPersianPersianSputnik افغانستانDariDari
Central Asia
ҚазақстанҚазақ тіліKazakhКыргызстанКыргызчаKyrgyzOʻzbekistonЎзбекчаUzbekТоҷикистонТоҷикӣTajik
East & Southeast Asia
Việt NamTiếng ViệtVietnamese日本日本語Japanese中国中文Chinese
South America
BrasilPortuguêsPortuguese