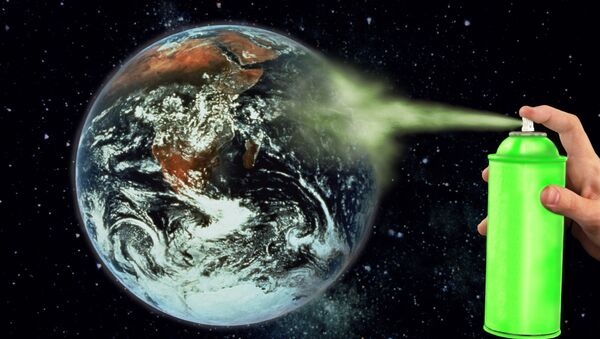 © East News / Gerard Lacz
Subscribe
The scientists found that the atmospheric abundance of these ‘very short-lived substances’ (VSLS) is growing rapidly, and the industrial production of VSLS is not controlled by the United Nations Montreal Protocol because historically these chemicals have contributed little to ozone depletion.

In the report, 'Efficiency of short-lived halogens at influencing climate through depletion of stratospheric ozone' and published in the journal Nature Geoscience, the scientists found that the atmospheric abundance of one of these ‘very short-lived substances’ (VSLS) is growing rapidly, and the industrial production of VSLS is not controlled by the United Nations Montreal Protocol because historically these chemicals have contributed little to ozone depletion.

“Due to their short atmospheric lifetimes, VSLS break down and destroy ozone in the lowermost part of the stratosphere. This is important, as a molecule of ozone lost in this region has a far larger impact on climate than a molecule destroyed at higher altitudes by longer-lived gases,” the study’s lead author Dr. Ryan Hossaini, from the School of Earth and Environment at the University of Leeds said.

US Environmental Protection Agency Head Proposes Limit on Ozone Emissions
VSLS can have natural and industrial sources. Naturally-emitted VSLS, such as seaweed in the ocean accounts for around 90 percent of the ozone layer depletion, but the dangerous trend is the increase in man-made VSLS compounds.

According to the study, there has been a rapid increase in atmospheric concentrations of dichloromethane, a man-made VSLS used in a range of industrial processes.

“It is uncertain what is driving this growth. However, it could be partly due to the fact that dichloromethane is used in the manufacturing process of some HFCs, the 'ozone-friendly' gases which were developed to replace CFCs. This would mean, ironically, that production of ozone-friendly chemicals is actually releasing some ozone-destroying gases into the atmosphere,” Dr. Hossaini said.

Volcanoes Block Global Warming: Study
Unlike chlorofluorocarbons (CFCs) and hydrofluorochlorocarbons (HCFCs), HFCs are not banned by the Montreal Protocol. Thus the use of HFCs has been increasing since the 1990s. The study concludes that if this increase is not halted, it could offset some of the benefits to the Ozone Layer that the Montreal Protocol provides.

The stratospheric ozone layer is a fragile shield of gas that protects the Earth from harmful ultraviolet rays from the sun. The Montreal Protocol on Substances that Deplete the Ozone Layer is an international treaty designed to protect the ozone layer by phasing out the production of numerous substances that are responsible for its depletion.

The treaty came into force in 1989 and is ratified by 196 countries, including Russia. Without the Montreal Protocol and associated agreements, atmospheric levels of ozone depleting substances could have increased tenfold by 2050, according to the United Nations Environment Programme.