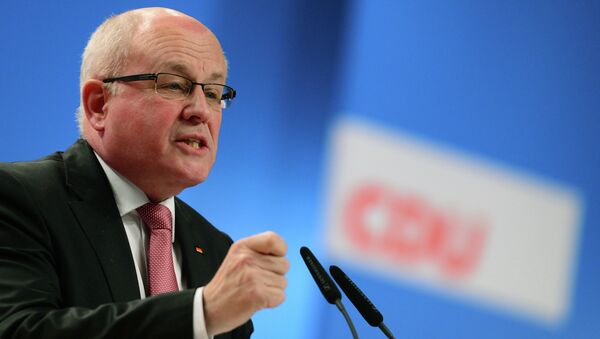 © AFP 2021 / JOHN MACDOUGALL
Subscribe
The parliamentary leader of Angela Merkel's Christian Democratic Union has hailed the German Chancellor as the leading political figure in Europe, said that Greece's government needs to be more realistic, and that the country needs to make greater efforts to deport its failed asylum seekers.

Merkel Sees 'Beam of Hope' After Ukraine Reconciliation Talks in Minsk
MOSCOW, (Sputnik) – Volker Kauder, the parliamentary head of Germany's center-right ruling Christian Democratic Union has said in an interview with the Rheinische Post that the Minsk agreement is a "sign of hope," Germany should be deporting more immigrants back to their country of origin, and that the Greek government needs to "pour their people some pure wine" about the country's state of affairs and reliance on further funding with its accompanying conditions.

In Saturday's interview Kauder referred to the "decisive" input of Chancellor Merkel in negotiating the ceasefire agreed in Minsk on Thursday, and also the "constructive role" played by Vladimir Putin. The ceasefire is a "sign of hope," said Kauder, but also stated that its test would come in the weeks to follow. The politician, who has been referred to in German media as "Merkel's right hand," commented that the lifting of the sanctions imposed on Russia "depends on how Russia behaves."

Upon being asked about the possible "Grexit" of Greece from the Eurozone, Kauder expressed his belief that being in the monetary union, and the corresponding obligation to pay back its debts, is a better option for the country than leaving. "Greece has to make its own decision. I am sure it knows the advantages that being in the Eurozone has," said Kauder.

German Finance Minister Skeptical About Greece Debt Talks With Eurogroup
"The style that the new government has displayed in the past two weeks has led to considerable ill-feeling in my party," remarked the CDU head.

The politician was also asked about the German government's plans to deport more immigrants, after recent proposals to increase deportations of failed asylum seekers back to their country of origin."There's no point in declaring one state after another a safe country of origin if then no deportations take place," said the politician. "So long they don't happen, uncontrolled immigration to Germany will continue."

In January, German authorities received an estimated 25,000 asylum applications, an annual increase of 73%. Reports in the German media of an "avalanche of immigrants" have focused on the 3,630 applications received last month from Kosovans, 99 percent of which the German Internal Affairs Ministry said had been refused.

On February 10 the federal state of Bavaria announced a proposal to declare Kosovo and Albania safe countries of origin, and on February 11 an official from the Federal Ministry of the Interior said that it would approve such a law. Last year Serbia, Macedonia and Bosnia-Herzegovina were also placed on the list of safe countries of origin, in an effort to curb the numbers of immigrants.