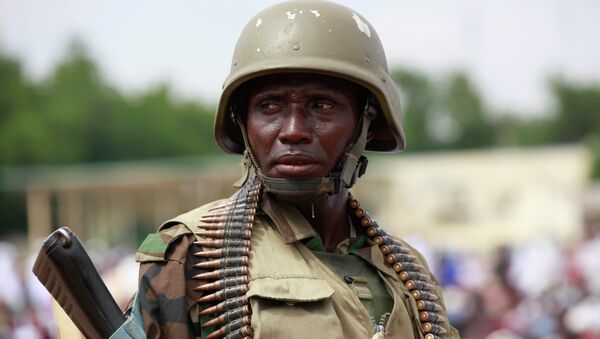 © AP Photo / Sunday Alamba
Subscribe
International
India
Africa
Nigeria's military announced that it has recaptured a key city from Boko Haram as it prepares for the delayed elections; Boko Haram launches a raid on a Cameroonian army base; Chad launches a USAFRICOM exercise and regional leaders discuss "eradicating" the group.

Nigeria's military announced that is has recaptured the town of Monguno on Monday, a city in the northeast of Borno state, which was seized by Boko Haram on January 25.

Troops in an operation led by highly coordinated air assaults have completed the mission of clearing terrorists from Monguno & environs. /1

In addition, the Nigerian military announced that several truckloads of supplies intended for Boko Haram were captured, as the country continues its operation against Boko Haram, which the government pledged to finish before the March 28 election. The town of Monguno also contains a military base, making it an important position for the Nigerian military.

Boko Haram fighters launched a cross-border raid on Monday, attacking a military base near the Cameroonian town of Waza.

"The wounded are being evacuated. The insurgents have been stopped. An APC (armoured personnel carrier) was taken from them and several of them were killed," a Cameroonian officer told journalists.

While Syria and Chad Both Fight Terrorists, US Plays Favorites
Meanwhile, Chad launched military exercises under the guidance of the US military Africa Command's (USAFRICOM) Special Operations forces, an annual exercise which has taken place in various African countries since 2005.

"This exercise takes place in a regional environment with major security issues posed by terrorists, in particular Boko Haram," the director of the exercise, Chadian Brigadier General Zakaria Ngobongue said at the opening of the exercises.

Leaders of Chad, Gabon, the Republic of Congo, Equatorial Guinea and the Central African Republic gathered in Cameroon's capital Yaounde to formalize their strategy against Boko Haram.

"We must eradicate Boko Haram," Cameroon's president Paul Biya announced at the meeting, which discusses the deployment of 8,700 African Union troops to combat the group.