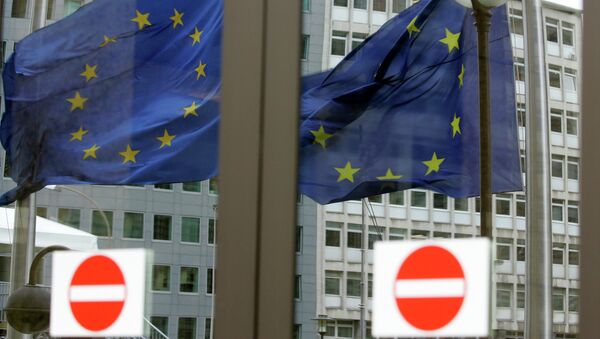 © AP Photo / Yves Logghe
Subscribe
The blacklist includes a total of 19 individuals and nine entities from Ukraine and Russia over their alleged role in the destabilization of Ukraine.

The two Russian politicians were among a list of 19 individuals, including three top Defense Ministry officials, and nine entities over their alleged role in the destabilization of Ukraine.

At an extraordinary meeting in Brussels on January 29, EU foreign ministers said they were compiling a list of new names to be targeted by EU travel bans and asset freezes.

Kobzon, who is also a renowned singer, was added to the blacklist for allegedly visiting his native Donetsk Region, now controlled by the pro-independence militia, and making speeches there. Rashkin is accused of organizing demonstrations in Russia in support of eastern Ukrainian militias.

EU to Ease Sanctions if Moscow Continues Aiding Ukraine Peace – Official
Both politicians voted in favor of a law that accepted the breakaway republic of Crimea as a Russian federal region, after the majority of the Black Sea peninsula voted in March to leave Ukraine for Russia.

The deputy head of the militia from the self-proclaimed eastern Ukrainian Donetsk People's Republic (DPR), Eduard Basurin, has also been added to the list.

A number of ministers from the self-proclaimed Luhansk People's Republic are also included in the blacklist, as well as commanders of armed groups fighting in eastern Ukraine.

At an extraordinary meeting in Brussels on January 29, EU foreign chiefs said they were making a list of new names to be targeted for EU travel bans and asset freezes.

The foreign ministers have adopted the list on February 9. However, they delayed its publication until February 16 so as not to impede Ukraine reconciliation talks, brokered by Russia, France and Germany that were underway last week.

The Kremlin calls the sanctions counterproductive, saying they do no help the resolution of the Ukrainian conflict in any way. On Friday, Russian envoy to the EU Vladimir Chizhov said the decision to expand the blacklist would discourage the warring parties from adhering to the ceasefire reached last week.