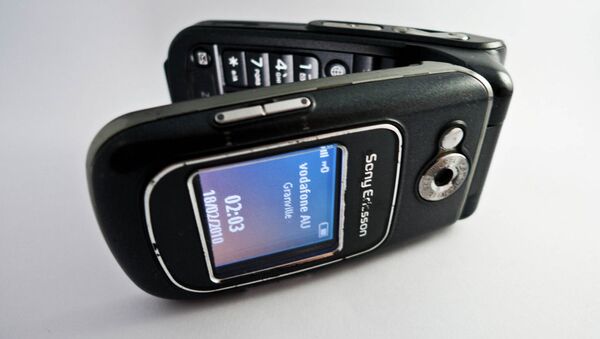 The Japanese have refused to let go of 'retro' clamshell mobile phones, shipments of flip phones rose in 2014 for the first time in seven years, while smartphone shipments fell.

Japanese Economy Shifts out of Recession
MOSCOW, February 16 (Sputnik) – The  Japanese, once considered innovators in mobile phone manufacturing, are now seemingly content to stick with older flip models, according to mobile phone shipment figures for 2014,  in contrast to the market domination of smartphones in the rest of the developed world.

According to data from MM Research Institute Ltd, last year shipments of flip phones rose by 5.7 percent to 10.58 million, while shipments of smartphone fell for a the second successive year, by 5.3 percent to 27.70 million.

Despite the more generous subsidies offered by networks for smartphones, which can consequently even be a cheaper alternative, Japanese consumers still have a fondness for what they call "feature phones." The trend has been referred to as a manifestation of the country's exceptionalism, termed "Galapagos syndrome" after the uniquely divergent species encountered by Darwin on the Galapagos Islands.

World's First Robot-Staffed Hotel to Open in Japan
In March 2013 MM Research's Tadayuki Shinozaki predicted that feature phones would retain a 30 percent share in the Japanese market, telling Japan's Rocket News that as well as having batteries that can last longer without being charged, the phones also appeal to certain demographics. "They’re easy to carry for the elderly. There are panic buttons for children to use. These special needs are conveniently and affordably filled by feature phones."

The predilection for older style phones comes in spite of Japanese phone manufacturing having once been at the forefront of mobile phone innovations. The world's first smart phone for web browsing, called i-mode, was released by NTT DOCOMO in 1999 and is still popular in Japan, and in 2000 the Kyocera Corporation released its VP-210 VisualPhone, the world's first mobile video and camera phone. The first commercial launch of third generation of mobile telecommunications technology was also made by NTT, in October 2001.