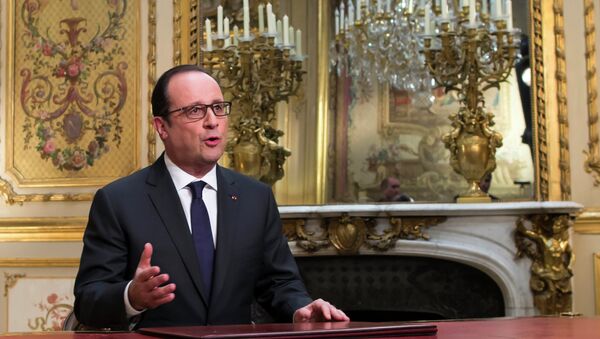 © AP Photo / Ian Langsdon, Pool
Subscribe
According to an official statement of the Elysee Palace, the president of France expressed his concern at the extension of the Islamic State operations in Libya and recalled the determination of France and its allies to fight against the group.

"The President of the Republic condemns in the strongest terms the brutal murder of 21 Egyptian nationals, Daech [IS] hostages in Libya. He denounced the terrorists' call for murder and religious hatred. He expresses his concern at the extension of Daech operations in Libya and recalls the determination of France and its allies to fight against the group," the statement says.

On Sunday, reports emerged that a group of Egyptian fishermen, all Coptic Christians, had been abducted by insurgents in Libya. A video allegedly showing their execution by the IS appeared later that day, causing outrage in Egypt.

On Monday, Egyptian television reported that the Egyptian Air Force carried out a series of bombings on IS positions in Libya. Egyptian President Abdel Fattah al-Sisi stated that Cairo had the right to respond to the executions "in any way."

The Islamic State is a jihadist group that seized substantial parts of Iraq and Syria in 2014, proclaiming an Islamic caliphate in the areas under its control. The group is infamous for its cruelty, and has released numerous videos of executions of foreign nationals.

A US-led coalition of more than 60 nations is carrying out airstrikes against IS positions.