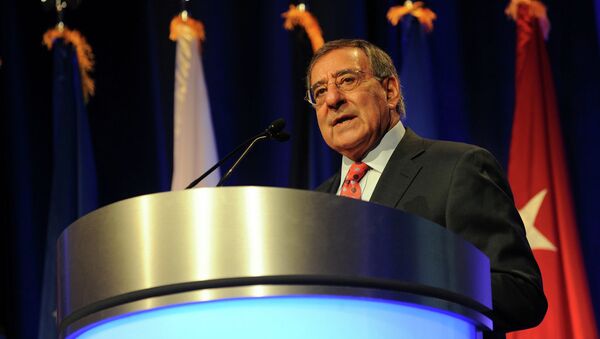 © Flickr / Jim Greenhill
Subscribe
Former US Secretary of Defense Leon Panetta is arguing for supplying arms to Ukraine, saying the US should counter Russia's influence in the former Soviet Union and act as a global leader.

Obama's 'Big Lie': US Has Supplied Ukraine With Arms From the Start
Dealing with Russia should be done from a position of "strength, not from weakness," former US Secretary of Defense Leon Panetta told Der Spiegel in an interview published on Saturday, saying that giving Ukraine military aid would give Russia a "higher price to pay."

"I would have provided arms to Ukraine early on because I think they need to have the military aid necessary to send Russia a message," Panetta told the publication.

Panetta said that he doubts that the current ceasefire will last, saying that "like the last one, it will only be temporary unless the West is willing to enforce it with both economic and military support to the Ukrainians."

Panetta added that he would act from a position of strength, and would also give more military aid to NATO countries which border Russia.

Ukraine, US Agree on Further Coordination if Donbas Conflict Escalates
"The United States has to be a leader in the world, because the problem is: If we are not leading, nobody else will," he added.

France, Germany, Italy, Spain and Finland have all rejected the idea of providing Ukraine with lethal assistance. Russia has warned that the proposed US arms deliveries to Kiev could lead to a sharp increase in violence in Donbas, where fighting intensified at the start of 2015. In addition, Russia denies that it is militarily involved in the conflict.