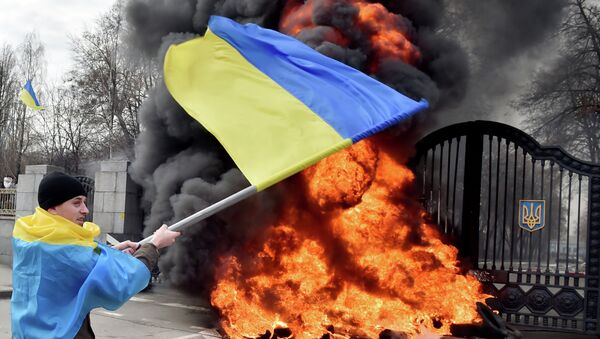 © AFP 2023 / SERGEI SUPINSKY
Subscribe
International
India
Africa
A Ukrainian MP has attributed all of the current domestic problems that plague his country to its allegedly 'wrong' bicolor national flag.

Ukraine's Donbas Ceasefire Generally Respected
All the internal problems in Ukraine can be attributed to the 'wrong' position of the colors blue and yellow on the country's national flag, Ukrainian MP Eugeny Rybchinsky claimed, according to the Russian news agency RIA-Novosti.

Rybchinsky insisted that the current events in Ukraine prove the words of Chinese artist Mao Mao, who in the early 1990s advised then-Ukrainian President Leonid Kravchuk to change the position of colors on the national flag by putting the yellow stripe over the blue one, not under it.

The current Ukrainian national flag's "rough blue top above the spiritual gold-yellow," is inadmissible, according to Rybchinsky.

"The current position of colors on the flag indicates that the nation recognizes the supremacy of passive things over active ones, conservative things over creative ones and material values over divine ones. This worldview runs counter to the natural state of the Universe and is destructive to a country which has such a national flag. This country is doomed to be in decline," Rybchinsky said.

He added that Ukrainian authorities should start considering changing the position of the colors on the national flag so as to quickly resolve Ukraine's domestic problems.

A blue-yellow banner officially became the national flag of Ukraine after the adoption of the country's sovereignty on January 28, 1992.

The flag's colors symbolize a clear blue sky over a yellow wheat field.