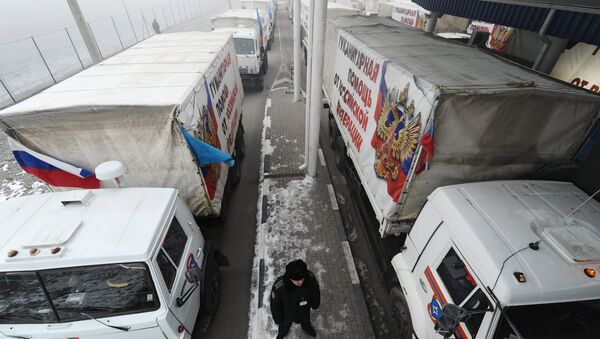 Most of the humanitarian aid comprises food, as well as medicines and construction materials. Textbooks and manuals have been brought for the students of Donetsk National University.

After the vehicles are unloaded, they will head back to Russia, Voronov said.

Earlier in the day, the 14th humanitarian aid convoy split into two parts, having entered Ukraine.

The 14th aid convoy comprises more than 170 vehicles carrying a total of more than 1,800 tons of humanitarian aid to the people of the conflict-torn Donbas.

Previously, Russia sent 13 aid convoys to Ukraine, carrying more than 18,000 tons of goods since last August. The 13th convoy returned to Russia earlier this week, after bringing over 1,100 tons of aid to Donetsk and Luhansk.