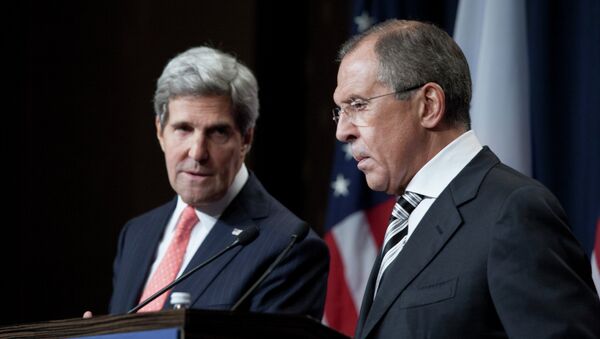 © Flickr / United States Mission Geneva
Subscribe
Russian Foreign Minister Sergei Lavrov and US Secretary of State John Kerry discussed the Ukrainian crisis in a telephone conversation, initiated by the US side on February 14.

Ukraine, US Agree on Further Coordination if Donbas Conflict Escalates
MOSCOW (Sputnik) — Russia's Foreign Minister Sergei Lavrov and US State Secretary John Kerry during a phone conversation on Saturday stressed the importance of adherence to the ceasefire in Ukraine.

"The Heads of Russian and US Foreign Ministries stressed the importance of adherence to the ceasefire, which should be implemented at midnight on February 15, by the conflicting parties," a statement published on official Facebook page of Russia's Foreign Ministry read.

Lavrov also emphasized that the Minsk Agreements include Kiev's obligation to remove financial and economic blockade from the Ukrainian southeast and to provide amnesty. Besides, Ukraine should carry out constitutional reform and adopt a law on the special status of Donbas, the Minister added.