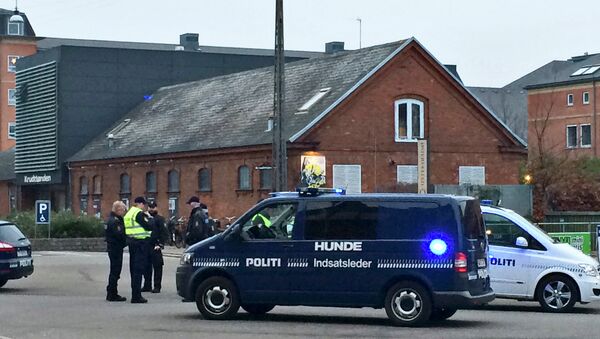 Gunfire erupted outside the Krudttønden cafe in Copenhagen where a blapshemy debate was held. Up to 40 shots were heard, according to local media.

At least one civilian have been killed and three policemen have been injured — one has been shot in the groin, one in the leg and the third one has been hit in the shoulder. According to the recent reports, they are out of danger.

Police has confirmed that the deceased man is a 40-year-old civilian. Police said they are investigating the attack as a terrorist act.

1 dead and 3 injured in shooting at cafe Krudttonden in #Copenhagen where debate on free speech. #cphshooting pic.twitter.com/UfG0DcdDkF

Cartoonist Lars Vliks and the ambassador were not injured.

Former Head of operations Frank Jensen commenting on the shooting said that "it seems to be in line with what we've seen in Paris".

French ambassador Francois Zimeray wrote on Twitter that he was not harmed.

Still alive in the room

President of France Francois Hollande has just issued a press-release where among other things he states that he has spoken with Prime Minister Helle Thorning-Schmidt, and the French Foreign Minister Bernard Cazeneuve will come to Denmark as soon as possible.

An attacker was wearing black and allegedly were not speaking Danish. He was described as a 25-20 years old man, about 180 centimeters tall, athletic with Arabic appearance, but with lighter skin.

Authorities in #Copenhagen say the attack on the blasphemy conference was a terrorist plot and 3 police men have been injured.

Eyewitnesses claim that the attacker spoke in Arabic language as he was shooting.

Suspect shouted in foreign language AS he shot, bartender at venue says. Other eye witnesses claim the language was arabic #copenhagen

Danish TV reporters say that civil vehicles with police officers are driving around the area, and 8-10 people in camouflage have arrived at the scene.

Jesper Frimand Christensen sought shelter behind the bar with his colleague. He said that the man shouted something in a language he did not understand. It sounded as if the man was inside the building, so Christensen and his colleague crawled away from the bar counter.

Another picture of the scene in Copenhagen, bullet holes seen at the door pic.twitter.com/fciDFaMyuB

Picture: Bullet holes in #Copenhagen at the Free Speech conference via @MagnusBjerg pic.twitter.com/3FWHRLryzu

The attacker fled the scene at hijacked VW Polo.

Swedish security police unit Säpo, which is responsible for the protection of Lars Vilks, now participates in the hunt for the suspect.

Thepolice are currently searching the attacker at the borders near Rostock and Puttgarden. A German federal police spokesman Thomas Mozdzynski announced that the border is not closed, but the border guard is in "search-mode".

The car that the suspect hijacked earlier and used as their getaway vehicle has been found in Østerbro.

The Danish Security and Intelligence Service (PET) commented on that the attack, saying that it shows that the terrorist threat in Denmark remaines serious.

Copenhagen Mayor Frank Jensen wrote on Twitter: "I am dismayed and deeply concerned about the shooting attack at Krudttønden. My thoughts are with those affected and their relatives."