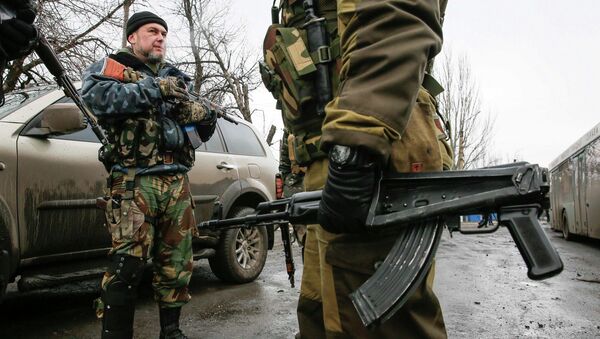 © REUTERS / Maxim Shemetov
Subscribe
Parliament speaker of the self-proclaimed Donetsk People's Republic Andrei Purgin said the people's republics in Donbas were against continuing fighting in the region and needed peace to bring people's lives back to normal.

Donbas Ready to Honor Minsk Deal if Kiev Keeps Its Side of Bargain
MOSCOW (Sputnik) – The self-proclaimed people's republics in southeastern Ukraine (Donbas) are against continuing fighting in the region and need peace to bring people's lives back to normal, the parliament speaker of the self-proclaimed Donetsk People's Republic (DPR) has stressed.

Lukashenko Stresses Importance of Minsk Agreements Practical Implementation
According to the DPR speaker, there is already a basis for conducting local elections in Donbas.

"The Minsk agreements outline issues of…cooperation with Ukraine, but that does not mean that from the political standpoint we will be part of Ukraine. As far as I see it, the memorandum does not stipulate any political dependence of DPR and LPR [Luhansk People's Republic] on Ukraine," Purgin said.

Their meeting resulted in two agreements. The first document was signed by members of the Contact Group on Ukraine, which comprises representatives from Russia, Kiev, the self-proclaimed people's republics of Donetsk and Luhansk (DPR and LPR) and the Organization for Security and Co-operation in Europe (OSCE). It outlines a number of measures aimed at ending the conflict in southeastern Ukraine, including a ceasefire between Kiev forces and independence supporters (coming into force at midnight, February 15), the creation of a buffer zone between the two sides through the withdrawal of heavy weaponry from the region and an all-for-all prisoner exchange.

The second document, signed by Normandy Quartet leaders, is a joint declaration in support of the measures agreed upon by the Contact Group.

The Minsk agreements also stipulate the implementation of constitutional reforms in Ukraine by the end of 2015, including with the aim of de-centralizing power in the country and giving a special status to some parts of the Donetsk and Luhansk regions.