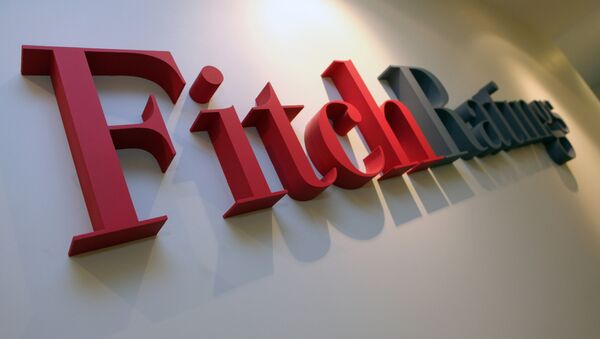 “The downgrade of Ukraine's long-term foreign currency IDR [Issuer Default Rating] to 'CC' … indicates that a default of some kind appears probable,” the statement said.

Ukrainian Parliament Members in Fistfight Over Anti-Corruption Bill (VIDEO)
The agency explained that the conflict in Ukraine and overall economic weakness have resulted in a greater financing needs than previously estimated.

Meanwhile, a negative GDP growth in 2014 and projections of a contraction of 5 percent this year also weighed heavily on the decision to downgrade, Fitch said.

World Bank Pledges $2Bln in Aid to Ukraine
The steep decline in Ukraine’s currency over the past year “is leading to a sharp external adjustment” and contraction in imports. As of January Ukraine has only 1.3 months of foreign exchange reserves for imports, Fitch said.

A further downgrade would be possible if there is an announcement to restructure debt with private external creditors, lack of progress on reforms and suspension of IMF funding, and an escalation of the conflict in eastern Ukraine, according to the rating agency.

“We currently do not envisage a situation in the short term in which the rating would be upgraded,” Fitch said.