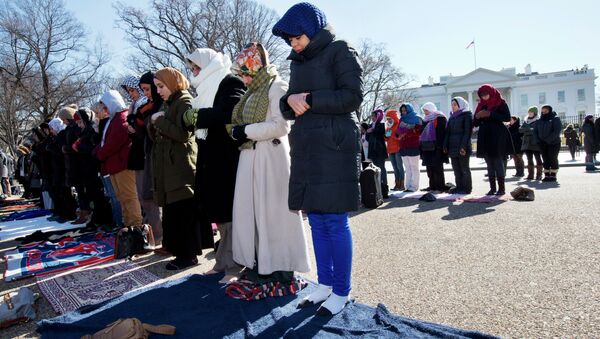 © AP Photo / Jacquelyn Martin
Subscribe
US President Barack Obama has issued a statement on the “brutal and outrageous” shooting of three young Muslims in Chapel Hill, NC, offering condolences and calling for unity.

In his statement the President said that the FBI had opened an investigation into “whether federal laws were violated” and cited the presence of over 5,000 mourners at the students’ funeral Thursday as evidence that “we are all one American family.”

At the end of his statement, President Obama quoted Abu-Salha, from a conversation she had recorded for the Storycorps oral history project a few months before her death, in which she called her life in America “a blessing”

On Wednesday, the White House said they had “no specific reaction” to the shootings, but the relative silence about the shootings from mainstream media and the President came under fire from community leaders and media outlets.

Obama’s statement comes the day after Turkish President Recep Tayyip Erdoğan criticized Obama’s lack of a response to perceived anti-Muslim violence in a speech he made during a state visit to Mexico.

Hicks posted comments online critical of religion and neighbors say he was a bully in the community, and was always irritated about aspects of the housing complex they lived in, the New York Times reports. His attitude was one of  "equal opportunity anger," said neighbor Samantha Maness.

Though the FBI is conducting a civil rights investigation, and the victims’ families have called this a clear hate crime, Hicks’ family insists it was a long-simmering feud over a parking space.

In addition to the ongoing investigation by local authorities, the FBI is taking steps to determine whether federal laws were violated. No one in the United States of America should ever be targeted because of who they are, what they look like, or how they worship.

Michelle and I offer our condolences to the victims’ loved ones. As we saw with the overwhelming presence at the funeral of these young Americans, we are all one American family. Whenever anyone is taken from us before their time, we remember how they lived their lives – and the words of one of the victims should inspire the way we live ours.