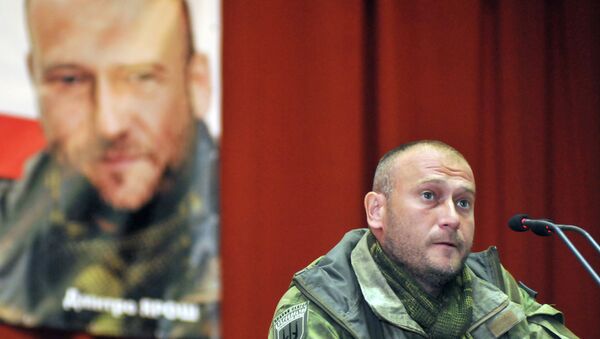 "If the Armed Forces of Ukraine receives an order to withdraw heavy weaponry and artillery [from the front lines] and set the ceasefire regime, the Right Sector Volunteer corps reserves the right to continue military actions in accordance with its own operative plans until complete liberation of Ukrainian territories," Yarosh wrote on his Facebook page on February 13.

According to Dmytro Yarosh, Right Sector is currently deploying its combatants and military reserves, and providing training to the recruits, while coordinating its activities with the Armed Forces of Ukraine and volunteer battalions of Defense Ministry and the Ministry of Internal Affairs, which take part in the special operation in eastern Ukraine.

VIDEO: Russian Right Sector Founder Nabbed in St. Pete
The Right Sector is an ultra-nationalist movement, incorporating several Ukrainian far-right groups and organizations. The movement appeared the most active force of Ukraine's Maidan protests of January 2013 and February 2014. The ultra-nationalists participated in armed clashes with police and organized seizure of administrative buildings in the country. Since April 2014 the Right Sector has been taking part in suppressing protests in eastern Ukraine.

Russia Bans Ukraine's Right Sector, Radical UNA-UNSO Activities
Since November 2014, the Supreme Court of the Russian Federation has recognized the right-wing organization as an extremist and banned its activity on the territory of Russia. Earlier Russia's prosecutors initiated a criminal case against Dmytro Yarosh for public calls for terrorist activity.

It is worth mentioning that on Thursday, during the second round of peace talks, the leaders of Ukraine, Germany, Russia, and France and the representatives of Donetsk and Luhansk, discussed a 13-point reconciliation deal aimed at ending of military confrontation, the withdrawal of heavy weaponry from the front line by both sides of the conflict, as well as constitutional reforms in Ukraine.