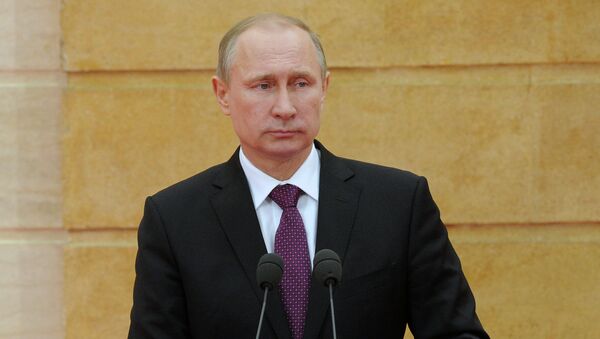 © Sputnik / Michael Klimentyev
/
Go to the photo bank
Subscribe
The US is not trying to solve the crisis in Ukraine, but pursuing its own interests in the conflict. European countries should maintain constructive relations with Russia and solve the conflict by diplomatic and political means, readers of the German newspaper “Süddeutsche Zeitung” claim.

Readers of the German newspaper “Süddeutsche Zeitung” wrote that the US activities and sanctions only contribute to the worsening of the Ukrainian crisis, adding that the key element for the conflict settlement would be the creation of sustainable pan-European security architecture in partnership with Russia.

“Putin won the battle for Ukraine,” writes Raimund Poppinga from Hannover in his letter to the newspaper. “Yes, there is a war in Ukraine. And all those who repeatedly say that wars are no longer to win today will have to admit [the opposite].”

Obama Threatened Putin Before Minsk Meeting – German Media
Tobias Gräf from Sulzbach-Rosenberg thinks that the Ukrainian conflict can be solved only by diplomatic means and supports the widespread opinion that Western arms supplies to Ukraine would only contribute to the deterioration of the situation. He also adds that a long-term settlement of the conflict would require “the implementation of a pan-European security architecture that will unite Western and Russian interests in an equal and non-competitive way”.

The US is using the Ukrainian conflict for its own interests, writes Karl Ibinger from München.  He claims that the country is pursuing its own geopolitical goals and is seeking the expansion of its influence in the region.

Putin Instructs Experts to Determine if Kiev Forces Encircled in Debaltseve
“When the US Vice President Joe Biden says he has frequently talked on the phone with the Ukrainian President Poroshenko and Prime Minister Yatsenyuk, he probably wanted to appoint his son to a chief position in the energy sector there, to prepare the fertile Ukrainian soil for Monsanto concern or nominate three US citizens for ministerial positions in Ukraine – thus, to promote American interests. And when Biden says he will not acknowledge a country claiming a sphere of its influence, he keeps silent [about the fact] that the US makes geopolitical claims for Ukraine of its own,” Mr. Ibinger wrote.

The imposed anti-Russian sanctions have only contributed to the worsening of the crisis, Ilse Nitzsche from Wolfratshausen writes in her letter. She thinks that European countries should enhance friendly contacts with Russia as the latter is set to play a key role in the resolution process.

“Instead of constantly imposing sanctions, it would be better to build bridges,” Mrs. Nitzsche says, adding that Russia should again be a member of G-8 and that the Russian President Vladimir Putin must be invited to the events commemorating the end of WWII, which will take place in May 2015.