Kiev to Consider Decentralization of Power During Constitutional Reform 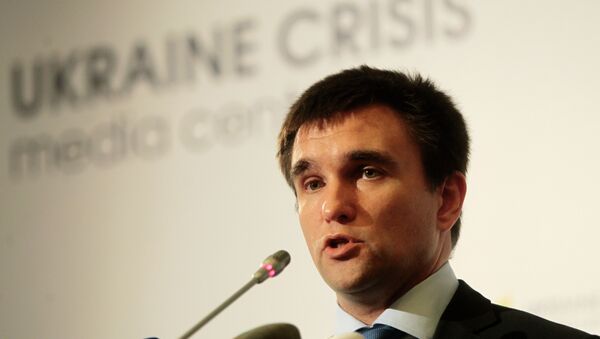 The Ukrainian foreign minister said that any further changes to the special regime in Donbas would be made within the legislation already approved by the parliament.

“The issue of decentralization, including in the context of Donbas, will be examined within the framework of the constitutional reform because no one has taken any responsibilities in any form or any legally binding or political aspects in the text [of the Minsk agreements],” Klimkin said during a parliamentary session in Kiev.

UK Lawmaker Warns Verkhovna Rada Against Opposing Decentralization
After the talks on Thursday in Minsk on the Ukrainian crisis between the leaders of Russia, Ukraine, Germany, and France, an agreement was reached that Kiev authorities would work on the decentralization of political forces, that may lead to more liberal arrangements for the eastern Ukrainian regions of Donetsk and Luhansk.

He said, however, that “any further discussions in regard to a special regime for Donbas would be accomplished within the legislation that has already been approved by the Verkhovna Rada.”

Earlier this week, President Petro Poroshenko said that decentralization that Ukraine is working toward will have nothing in common with federalization.

Decentralization has been a crucial political issue for Ukraine's east. Following a February 2014 coup in Ukraine, the Donetsk and Luhansk regions established themselves as so-called people's republics, refusing to accept the new central government. A law granting "special status" and broader autonomy to the parts of the breakaway regions was introduced by Kiev in the fall but was abolished shortly afterward.