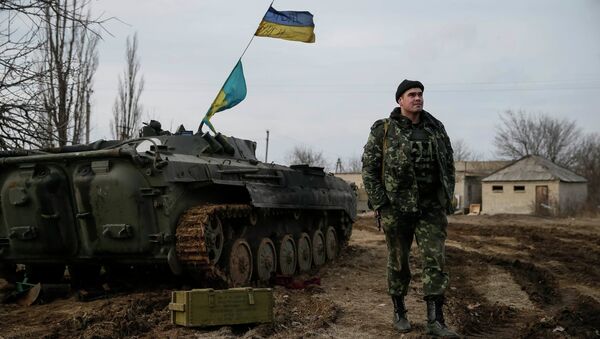 © REUTERS / Gleb Garanich
Subscribe
Experts say that US legislation to train and arm Ukraine forces was designed to shape the talks to pressure Russia into coming to these Minsk agreements.

“I think that entire move to float that possibility [of arming Ukraine] publically, was designed to shape the talks to pressure Russia into coming to these Minsk agreements, and ultimately being more cooperative on these issues,” Eurasia Analyst for a global intelligence firm Stratfor, Eugene Chausovsky, told Sputnik on Thursday.

Chausovsky was reacting to a resolution passed by the US House of Representatives on Tuesday that would authorize $1 billion for training, equipping, and providing lethal aid to Ukraine through September 2017.

Russian scholar from the Wilson Center Michael Kofman, told Sputnik that although he doubts Obama will sign the bill, the legislation demonstrates to Moscow that if an agreement is not finalized, Russia will face a more aggressive US policy in Ukraine.

“I do not believe the President will sign such legislation, but at the moment its existence alone is helpful as a potential warning to Russian leaders regarding the possible future evolution of this conflict,” Kofman said.

In particular, the document calls for a ceasefire starting on February 15, prisoner swaps and withdrawal of weaponry and Ukrainian constitutional reforms.