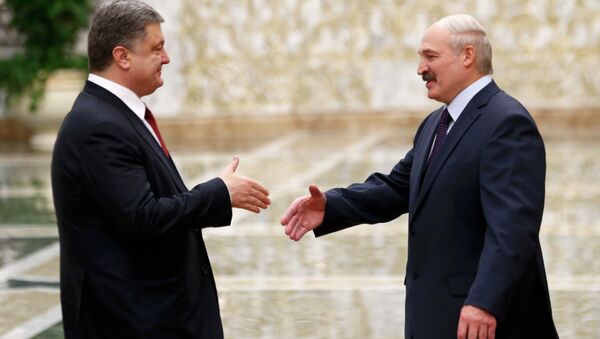 © REUTERS / Vasily Fedosenko
Subscribe
UN Secretary General Ban Ki-Moon urges the parties of the Ukrainian conflict to ensure a genuine and lasting ceasefire, paving the way for a broader political settlement of the conflict, based on the Minsk accords.

EU Must Lift Anti-Russia Sanctions if Minsk Measures Implemented - Experts
NEW YORK (Sputnik) — UN Secretary General Ban Ki-Moon called on all parties of the Ukrainian conflict to ensure "a genuine and lasting ceasefire," leading to a broader political settlement in the crisis-hit country.

The leaders of Ukraine, France, Germany, and Russia held a 16-hour summit in Minsk on Wednesday and early Thursday that resulted in a new political deal aimed at stopping the deadly conflict in eastern Ukraine that has claimed lives of more than 5,400 people since April 2014.

"He urges the parties concerned to ensure that a genuine and lasting ceasefire will commence on 15 February as agreed, paving the way for a broader political settlement of the conflict, based on the Minsk accords," the document says.

The UN stated it was ready to assist the situation in any way deemed helpful. The organization will continue monitoring the human rights and deliver support to those who need it, the UN statement said.

Today's agreement calls for a ceasefire to begin at midnight on February 15 and also demands the mutual withdrawal of heavy weapons by Kiev forces and independence supporters to create a security zone.

Last September, the independence supporters and Kiev managed to sign a ceasefire agreement and a memorandum, specifying its implementation in Minsk. Despite the deal, clashes between the warring sides continued, with the situation deteriorating in recent weeks. The warring sides continued shifting the blame for rising civilian death toll in what the UN branded the "worst hostilities" since the truce was signed.