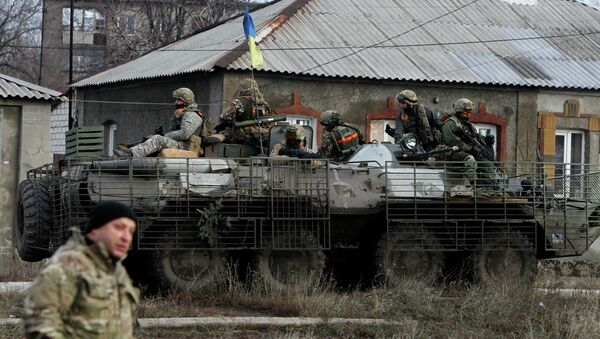 Experts point out that the adoption of a new constitution providing for decentralization of Ukraine is of great importance.

Minsk Talks Didn’t Lead to a Magical Peace
MOSCOW (Sputnik), Daria Chernyshova — The reconciliation deal on Ukraine worked out by the leaders of Ukraine, Germany, Russia, and France on Thursday has the potential to become the beginning of an end to the Ukrainian conflict, but to succeed it needs the continuous supervision of its patrons, experts told Sputnik news agency Thursday.

“In sum, the agreement will need the continued attention of all its patrons, notably Germany and France, continued pressure on all sides to implement, and continuous participation of Russia in the support of the implementation process,” Josef Janning, senior policy fellow with European Council on Foreign Relations told Sputnik.

The deal worked out Thursday after over 15 hours of negotiations outlines 13 points aiming to end the military confrontation between Kiev forces and independence supporters in eastern Ukraine.

Heavy Artillery Withdrawal in Donbas Should Be Completed Within Two Weeks
“Technical agreements become important, because they are backed by Putin, Hollande, Merkel and Poroshenko,” Willy Wimmer, former vice president of the Organization for Security and Co-operation in Europe (OSCE), told Sputnik.

Some stress that the deal is very much like the accords signed in September, but Janning notes that the agreement “has more detail and timelines which will allow a fast and unambiguous assessment whether the parties are in compliance with the terms,” which sets a framework for a return to a negotiated settlement of the crisis.

Under the deal, both sides take on obligations they have to fulfil. The experts point out that the adoption of a new constitution providing for decentralization is of great importance.

Ceasefire in Ukraine to Begin Midnight February 15 - Putin
Wimmer also warned that if not taken seriously, the deal could become “the entrance for those in Kiev and Washington, who want to fight seventy years after the end of the Second World War the next big war on European soil.”

The negotiations took place amid a sharp deterioration in the situation in Donbas. Despite a ceasefire agreement reached by the warring sides in September 2014 in Minsk, clashes continue in conflict-torn eastern Ukraine.