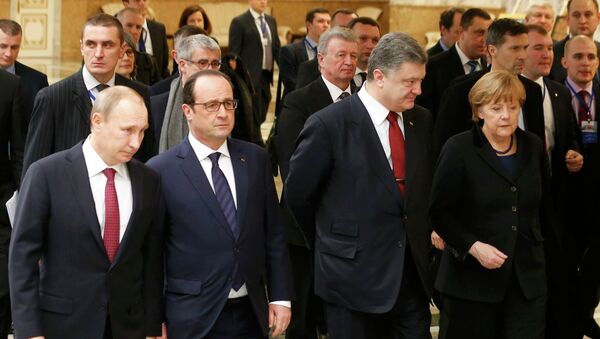 All responsibility for any breach of the agreements lies on the Ukrainian President Petro Poroshenko, the DPR head underscored.

“According to the memorandum points, all responsibility for any violation of non-implementation of some agreements lies on [Ukrainian President] Petro Poroshenko,” Zakharchenko said, adding that if the agreements are violated, there will be no new memorandum.

Heavy Artillery Withdrawal in Donbas Should Be Completed Within Two Weeks
The DPR head espressed a hope that the signed agreement would put an end to hostilities and help the Donetsk and Luhansk people's republics start restoring their civil life. This would also help Ukraine change itself, Zakharchenko suggested.

Zakharchenko added also that the negotiations continue, and that some points still have to be agreed upon.

Donetsk, Luhansk Leaders Sign Minsk Deal on Ukraine - Hollande
Following the talks, Russian President Vladimir Putin stated that the document on implementation of Minsk agreements has been signed during the Normandy Format meeting. The ceasefire in eastern Ukraine will come into effect at 12:00 a.m. local time on February 15 (February 14, 22:00 GMT). Heavy artillery will be withdrawn from the contact line agreed on today and last September, Putin said.

Last September, the independence supporters and Kiev managed to sign a ceasefire agreement and a memorandum specifying its implementation in Minsk. Despite the deal, clashes between the warring sides continued, with the situation deteriorating in recent weeks.