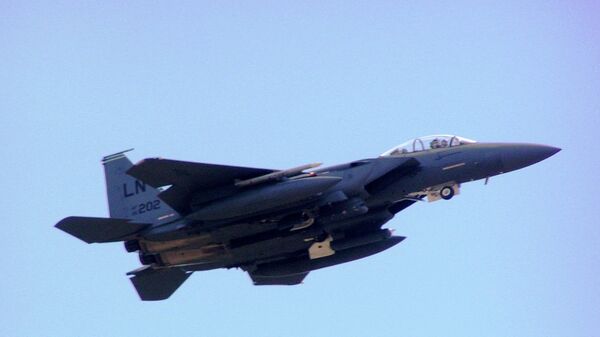 According to a British think tank, US-led coalition air operations against the Islamic State cannot inflict strategic defeat on the group.

US Defense Secretary Urges Congress to Take Military Action Against ISIL
MOSCOW (Sputnik) — Airstrikes carried out by the US-led international coalition against the Islamic State (IS) in Syria and Iraq are not enough to strategically defeat the militant group, the International Institute for Strategic Studies (IISS), a British think tank, said Wednesday.

“Coalition air operations may lead to tactical victories against ISIS – especially when they enable progress by fighters opposed to it – but they cannot inflict strategic defeat on the group,” the IISS said in a statement, accompanying its annual Military Balance report.

The think tank noted that the Pentagon had to admit in late January that total gains made against the Islamic State in Iraq add up to about 1 percent of the territory held by the militants.

Military methods alone are not sufficient to tackle the “sophisticated means that ISIS uses to recruit and inspire its followers and sustain its operations”, according to the IISS.

Long-term training and support for Iraqi forces and government institutions and Syria’s non-IS fighters, as well as political efforts to regain the trust of Iraqi Sunnis, are likely to be required, the think tank argued.

The United States is currently carrying out a multi-pronged strategy to “degrade and ultimately destroy” IS, which includes a coalition air campaign, as well as training and equipping Iraqi forces and moderate Syrian opposition fighters.

The US-led coalition began carrying out airstrikes against Islamic State targets in Iraq in August, expanding the air campaign to Syria in September, though without Syrian government approval.