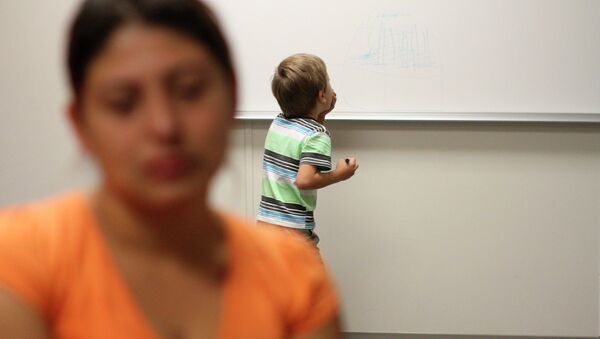 Two-Week Protests End at Australia’s Center for Undocumented Immigrants
MOSCOW (Sputnik) — Over 300 children in Australian immigrant detention centers self-harmed or threatened to self-harm between January 2013 and March 2014 in protest against poor conditions and human rights violations, a study by the Australian Human Rights Commission showed.

The report, presented to the public Wednesday, was handed to the Australian government in November 2014, according to media reports.

In the 15-month period studied, the report also suggested that 33 children were sexually assaulted and 27 voluntarily went on hunger strike protesting against detention conditions, and more than 200 were involved in some form of assault.

At least 12 children were born in immigrant centers which means they may be denied the right to nationality and state protection.

Immigrants in Australian Detention Center Strike Demanding Refugee Status
Being placed in immigrant centers for a long time contributes to mental illnesses among detained children, according to the study. Almost a third of minors surveyed described themselves as sad all the time.

The report recommended releasing all the detained children and their families to local communities with a right for their parents to work.

Other recommendations envisage adopting legislation ensuring undocumented immigrant children should only be detained for health, identity and security checks. Further incidents should be prevented by establishing cameras in every detention center, the study suggests.

The total number of asylum-seekers in Australian immigrant centers is over 5,500. Over 1,000 of those are children, according to the report.