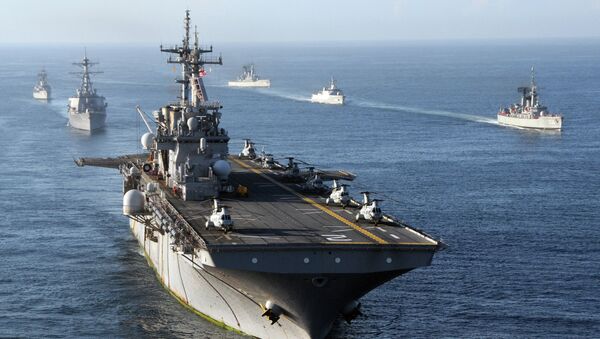 © Flickr / Official US Navy Page/SPC Mark Alvarez
Subscribe
International
India
Africa
Three US Navy admirals caught up in a bribery scandal involving a Singapore businessman who was trying to get into their good graces have been censured.

Navy Secretary Ray Mabus issued Letters of Censure to the three, saying they improperly accepted gifts and endorsed a commercial business, who was trying to win port service contracts in Asia.  The Navy admirals are accused of violating the rules for and helping out Leonard Glenn Francis, a Singaporean known as “Fat Leonard” who himself plead guilty last month to federal charges of bribing naval officers as a way to get naval contracts. Francis owns a business that specializes in providing supplies to ships.

Francis used a variety of come-hither techniques to ensnare the Navy men, including cash, luxury travel, booze and hookers, in exchange for inside information that would help his company get the inside track on contracts.

The three admirals – Vice Admiral Mike Miller, a former Naval Academy superintendent, and rear admirals Terry Kraft and David Pimpo – will be allowed to retire. A censure letter basically derails an officer’s career path. The Navy said that their conduct was not necessarily criminal, but it did violate the service’s ethical standards. Five other naval officers have pled guilty in the case and an investigation is still ongoing.

The officers received the letters because their behavior did not rise to the level of criminal behavior, but still violated the Navy’s ethical standards. Their conduct, the Navy said “cultivated an unacceptable ethical climate within the respective commands.”

“All Navy officers, particularly our senior leadership in positions of unique trust and responsibility, must uphold and be held to the highest standards of personal and professional behavior,” said Secretary Mabus in a statement. The three officers, Mabus added, “demonstrated poor judgment and a failure of leadership."

Meanwhile, Francis is in federal custody in San Diego and pled guilty to several counts of bribery, corruption and influence peddling.