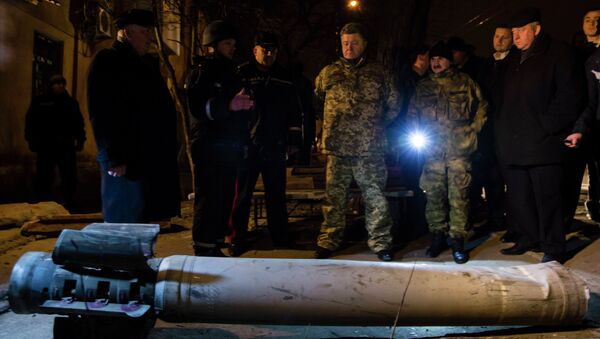 © REUTERS / Mikhail Palinchak/Ukrainian Presidential Press Service/Handout via Reuters
Subscribe
President Poroshenko will bring an element of Smerch cluster munition to the Minsk talks on Ukraine reconciliation Wednesday in keeping with tradition to show different objects, which he believes are allegedly proving Russian involvement in the country's internal crisis.

Earlier in the day, Poroshenko visited the Ukrainian city of Kramatorsk that came under shelling on February 10 to inspect the situation there.

"These are the evidence of the usage of dispensing weaponry against civilians in the center of Kramatorsk. Here in my hands I have an element of cluster munition 'Smerch'. … I will show this evidence in Minsk and at the session of the EU Council," Poroshenko was quoted as saying by the press service.

According to Poroshenko, the element is proof that munitions used in eastern Ukraine were produced and used by Russia.

Poroshenko blames the attack on independence supporters whereas the latter insist they did not fire any weapons in the direction of Kramatorsk.

Kiev has long been saying that independence supporters are receiving weapons from Russia. Moscow denies the allegations.

McCain to Sputnik: Ukraine's Use of Cluster Bombs Is US' Fault
Poroshenko's statement comes ahead of the much-anticipated Normandy Quartet meeting in the Belarusian capital. Leaders of Russia, Germany and France are also taking part in the talks.

This is not the first time the Ukrainian leader has brought evidence to international negotiations.

On February 7, the Ukrainian president addressed the Munich Security Conference in Germany, brandishing the covers of Russian passports and military IDs, saying they were evidence of "Russian presence" in Ukraine's southeast. Moscow then asked for copies of the documents but Kiev failed to provide them.

In late January, Poroshenko, while addressing the World Economic Forum in Davos, Switzerland, showed a shrapnel-pocked fragment from a bus allegedly hit by Donbas independence supporters.