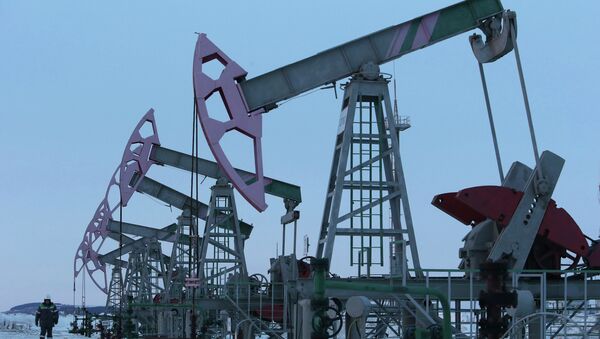 Russian Economic Development Minister said there would be a surplus budget by 2017 should oil prices hover at $70 a barrel.

WTI Oil Price to Plummet to $20 per Barrel in 2015 - Citigroup
GORKI, Moscow Region (Sputnik) – Russia’s federal budget for 2015 will have a deficit of 3.8 percent of the country’s gross domestic product, but will have a surplus by 2017 if oil prices increase, Economic Development Minister Alexei Ulyukayev said Wednesday.

“According to our figures, there will be a deficit of 3.8 percent of GDP. In my opinion this may be fully financed using the reserve fund,” Ulyukayev said.

The minister added that there would be a surplus budget by 2017 should oil prices hover at $70 per barrel.

New Balance Found by Oil Market at $55 per Barrel, Experts Claim
“Budget regulations tell us that by 2017 we will reach $70 per barrel [of oil], which means that we will have a surplus budget and save part of the reserve fund,” he added.

The Russian budget relies largely on oil revenues, which slumped in the second half of 2014 due to global overproduction. The ruble has lost about a half its value against the dollar since the summer.

In January, the Russian government presented an anti-crisis plan set to stabilize the economy. The plan stipulates deep spending cuts and aims to balance the country's budget by 2017.