Russia Grounds All Su-24 Bombers After Crash Near Volgograd 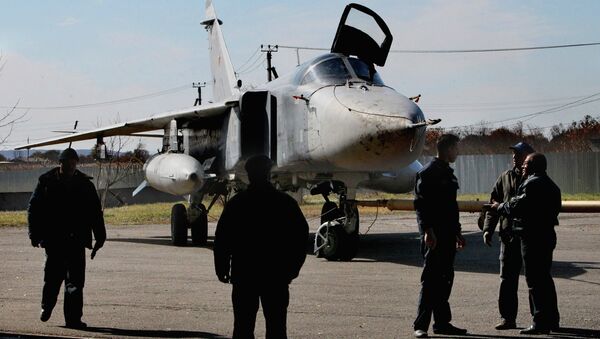 The crash of a Su-24 earlier on Wednesday forced Russia to stop the flights of all tactical bombers of the same model.

Russian Su-24 Bomber Crashes Near Volgograd, Fate of Pilots Unknown
MOSCOW (Sputnik) – All Russian Su-24 (Fencer) tactical bombers have been grounded throughout the country until the reason for the crash of one of the jets earlier on Wednesday near the southern city of Volgograd is explained, the Russian Defense Ministry’s press service said.

“As per a decision by the head of the General Headquarters of the Armed Forces of the Russian Federation, flights of Su-24 airplanes have been temporarily halted until an explanation for the reason of the incident,” the press service said in a statement.

Earlier on Wednesday, a military source told RIA Novosti that a Su-24 crashed near the Marinovka airport outside Volgograd.

There were two crew members on board, but their fate is still unknown.

Russian MiG-29 Jet Fighter Crashes Outside Moscow, Both Pilots Survived
A search for the aircraft is underway. The Russian Defense Ministry’s special commission will take part in the investigation into the tragedy.

The Sukhoi Su-24 twin-engine frontline bomber was developed in the Soviet Union. The modified version, Su-24M, entered service in 1983 and is still in use by some former Soviet states. In 2010, the Russian Air Force decided to replace its Su-24s with modern Su-34s, with the full replacement to be completed by 2020.