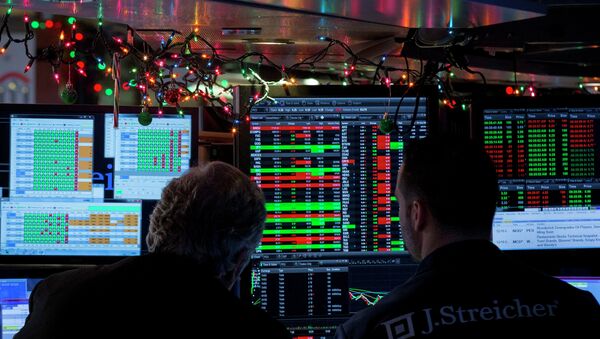 © REUTERS / Brendan McDermid
Subscribe
There are signs that the European stocks might see a massive selloff in the coming days should anything go wrong in Greece or Ukraine situations as some assets are overvalued.

Possible 'Grexit' Weighs on Global Stocks; Oil Might Plunge to $20 Bbl
Kristian Rouz – Stock markets across the globe posted gains Tuesday on the reassuring news from Greece, as several media outlets reported early in the day that an agreement of sorts between Athens and its international creditors is amay be a possibility, while first in a few months the first direct phone talks between President Obama and Russia’s Putin in several months eased concerns over the ongoing war in Ukraine.

US stock markets edged up at the close on Tuesday with tech giant Apple posting record gains and, having exceedinged $700 bln in market valuation. Investors’ optimism was fueled by hopes that Europe might move towards more financial and political stability after it became known rumors surfaced that the European Commission in intending intends to propose Greece a a compromise debt deal to Greeceover its problem external debt.

The struggling nation might getreceive a six-months transition period in order to finalize bailout and reform measures with little pain before implementing any austerity moves.

As a result, several major assets appreciated in Europe, including Swiss franc-denominated bonds of Apple Inc., boosting the latter’s valuation above the psychological mark of $700 bln first time in the US economic history. Apple’s stock rose 1.9%, pushing the S&P 500 and Nasdaq Indices up.

Greek Debt Crisis Poses Risks to British Economy - Chancellor of Exchequer
The Dow Jones Industrial added 0.79%, the S&P 500 rose 1.07%, and the Nasdaq Composite advanced 1.3%, as investors were reassured by the Greek news and by the fact the President Obama spoke with Putin ahead of talks on Ukrainian crisis, opening on 11 February.

“The fundamentals are improving a little bit because the situation in Ukraine did not explode. That was a concern over the weekend. Also, Greece hasn't fallen off the radar,” Adam Sarhan of the New York-based Sarhan Capital told Reuters.

While there is more diplomacy and less fighting in Greece and Ukraine, at least as reflected by the media, investors feel it might be high time to buy. In Europe, stocks advanced aggressively, with biggest gains seen in Athens. ‘Wow, we’re getting the money without immediate austerity in effect,’ an average Greek trader might think, and the information background suggests he might be just about right.

The ATG Index skyrocketed by 8% in Greece Tuesday, thea sunny day for the nation’s financial sector. Shares of the National Bank of Greece posted even more impressive gains, rising 21% up. Eurobank and Bank of Piraeus both advanced 20% and 16%, respectively.
However, the Greek banking sector is still 27% below its worth at the start of 2015.

Poroshenko Heading to Minsk Talks to Call for Ceasefire, Start Dialogue
There are signs that the European stocks might see a massive selloff in the coming days should anything go wrong in Greece or Ukraine, situations as some assets are overvalued. "We're not selling equities at this point, but we're starting to look for exit points on a number of stocks that are reaching excessively high valuation levels," Frederic Rozier of Meeschaert told Reuters.

Stock markets in Asia-Pacific opened in the green on Wednesday, following thea trend set on Wall Street the other day with Korea’s Kospi Index adding 0.6%, mainland China’s Shanghai Composited advancing 0.3%, Southeast Asia and Taipei surging as well. Hong Kong, however, posted losses, retreating by 0.5%, in the red is Australia’s S&P/ASX 200 (-0.7%) as well,  while in Japan bourses are closed on a holiday.

“Traders are engaged in the process of trying to determine whether or not these (ongoing talks of the Greek debt) provide any credible clue as to the final outcome of the negotiations. Last night’s conflicting statements were taken as a positive on balance,” Ric Spooner of the Sydney-based CMC Markets said as quoted by Bloomberg.

“A recovery in oil price is not absolutely certain for now,” Kirill Pyshkin of the London-based Mirabaud Asset Management told Bloomberg.

Russia’s exchange-traded funds advanced in New York Tuesday after Obama spoke with Putin. Market Vectors Russia ETF hit its two-month high, adding 2%. The Bloomberg index of the US-traded Russian stocks rose 0.8%, in a week the index advanced by 9%, and the rouble strengthened to its one-week high, to 65.46 RUB per 1 USD.

However, in case Wednesday’s talks on Ukraine end without a decisive peace resolution, the situation infor Russia’s assets is doomed to deteriorate as new US and EU sanctions are ready to gobe emplaced.