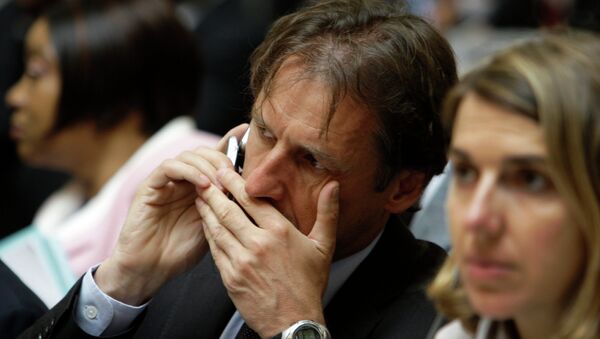 © AP Photo / Anja Niedringhaus
Subscribe
Don’t expect any privacy when you use a cell phone, especially from the federal government.

The feds particularly don’t want you to know about those pesky cell phone interceptors they’re using ostensibly to track down crime but that also lift info from nearby phones caught up in the sweep. Even if you tried to find out about it using a request for public records, the FBI would probably know because they have agreements with some local agencies that would notify the FBI of such requests.

Take for instance a letter the FBI wrote nearly three years ago to the Minnesota Bureau of Criminal Apprehension about how to handle requests for information.

"The Minnesota Bureau of Criminal Apprehension will immediately notify the FBI of any such request telephonically and in writing in order to allow sufficient time for the FBI to seek to prevent disclosure through appropriate channels." And like that are agreements with other jurisdictions across the US.

The FBI has been pretty mum about the use of “Stingrays” and other interceptors, saying it’s a matter of national security, but others think differently.

Two US Senators – Republican Chuck Grassley of Iowa and Democrat Patrick Leahy of Vermont – have been conducting their own investigation into the government’s use of “Stingrays” and other cell phone interceptors, and recently sent a letter to Homeland Security Director Jeh Johnson expressing concern that the FBI doesn’t obtain search warrants when their agents use those devices in public.

The senators said they found that out recently at a private briefing with Homeland Security officials. The FBI is supposed to get a search warrant, except in certain circumstances, and Grassley and Leahy said they were troubled by the broad number of exemptions the FBI uses to get around the search warrant requirement.

“We have concerns about the scope of the exceptions,” the letter states. “Specifically, we are concerned about whether the FBI and other law enforcement agencies have adequately considered the privacy interests of other individuals who are not the targets of the interception, but whose information is nevertheless being collected when these devices are being used.

Across all DOJ and DHS entities, what protections exist to safeguard the privacy interests of individuals who are not the targets of interception, but whose information is nevertheless being collected by cell-site simulators?” the letter asks.

The FBI and other governmental agencies claim that Stingrays and other cell phone intercepts are only used to investigate high-profile crimes, but the activist group Anonymous found that in Chicago, police were using Stingray to listen-in on phone calls from an Eric Garner protester.

Despite claims from government entities that Stingrays are only used to investigate high-profile crimes, continued exposure on the topic proves the complete opposite to be true.