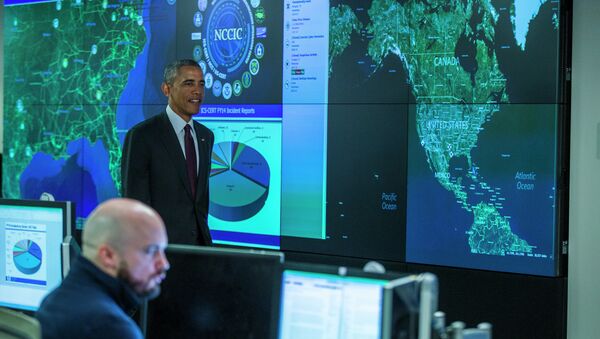 © AP Photo / Evan Vucci
Subscribe
The Obama administration announced creation of another federal intelligence center in the long list of law enforcement and spy services. This time its main task will be cyberintel.

The last year saw high-profile hacks into Sony Pictures, which set off a firestorm of controversy surrounding their film “The Interview.” But other security breaches, like cyberattacks on Home Depot, Target, and even the social media accounts of US Central Command, made President Obama to prioritize cybersecurity.

Called the Cyber Threat Intelligence Integration Center (CTIIC), the new agency will be an “intelligence center that will ‘connect the dots’ between various cyber threats to the nation so that relevant departments and agencies are aware of these threats in as close to real time as possible,” according to an unnamed Obama administration official who spoke to Washington Post. Profiling hacker groups, gathering their digital "signatures" and sharing threat information with law enforcement and intelligence agencies will be the main task of the new center.

Right now, cybersecurity is managed by a hodgepodge network consisting of the National Security Agency, Department of Homeland Security, FBI, and CIA, but a lack of coordination between these departments is a critical weakness in US intelligence. The CTIIC will, theoretically, serve to pool all of this cybersecurity information in one place. Following 9/11, the Bush administration created the National Counterterrorism Center to establish better communication between various US intelligence agencies. The CTIIC would work in a similar way.

“No existing agency has the responsibility for performing these functions, so we need these gaps to be filled to help the federal government meet its responsibilities in cybersecurity,” the unnamed Obama administration official said.

To appease these concerns, the Obama administration established the National Cybersecurity and Communications Integration Center (NCCIC), a cyber data hub with some semblance of oversight. The NCCIC will purportedly start gathering its intelligence directly from the CTIIC.

However, it didn't satisfy privacy advocates. Judge Andrew Napolitano told Fox Business network that the government is "least equipped" to protect Americans from cyberinvasion, because its not interested in unbreakable products that the government itself can't penetrate.

The Obama administration has been encouraging the private sector to voluntarily share user data with the government for threat assessment, and last month, Prime Minister David Cameron also asked for that data to be shared with British intelligence in real time.