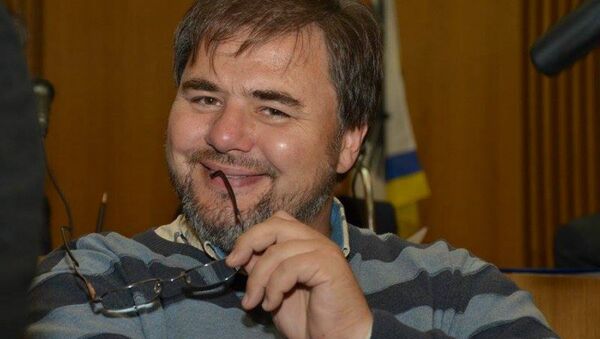 © Ruslan Kotsaba's vkontakte
Subscribe
As thousands of Ukrainian men between the ages of 20 and 60 face the draft, a journalist has been accused of "treason" and "espionage" for telling potential fighters to say no to civil war.

Ukrainian Recruit: I Don't Want to Fight for Those Who Don't Care About Us
The arrest of Ukrainian television journalist Ruslan Kotsaba on charges of treason and espionage on Sunday over his anti-mobilization sentiments has led to widespread condemnation from lawyers, rights groups, and even the Ukrainian media.

Kotsaba was arrested following the release of a YouTube video last month in which he challenged the country's mass mobilization campaign, noting that he would rather "sit in jail for two to five years than join in the civil war to the east, to kill my Ukrainian brothers in the east." The journalist openly declared, "I refuse to be drafted and call on everyone who is called up to refuse." He appealed to President Petro Poroshenko regarding his election promises to end the fighting, and noted that he would patriotically serve if called upon to serve the country against bona fide foreign aggression.

The Ivano-Frankivsk-based journalist was served a sixty day detention sentence on Sunday pending further investigation. The journalist is expected to appeal that his detention be reduced to house arrest, citing his small children and responsibility to tend to ill relatives, but authorities are believed to be reluctant, fearing he would attempt to flee the country if released. Kotsaba's wife stated via social media that the Ukrainian Security Service (SBU) has searched his belongings, among which the agency has claimed to have "found evidence of his crimes."

The document read out by the court noted that the journalist's "video message, in which he insisted on the illegality of mobilization and the unjustifiable fratricide by twisting the facts, had received a significant number of views, which in turn has negatively affected the process of mobilization." The journalist faces up to 23 years if convicted of the charges of treason and espionage. His charges include the disruption of the draft, as well as granting interviews to the Russian and eastern Ukrainian media, some of them paid, according to the SBU. The bulk of the consternation from the Ukrainian authorities seems to stem from the fact that Kotsaba has called a spade a spade, noting that the Ukrainian conflict is a civil war, rather than referring to it as a "Russian invasion" or "Russian-backed separatist" campaign.

Charges Derided as a 'Legal Circus'

Rights activist and lawyer Tatyana Montyan was quoted by Ukrainian news portal Vesti as saying that "judging by media reports, the SBU has no evidence. Article 114 (for espionage) is itself a real circus; in it only a foreigner can serve as the subject. As for article 111 (treason), authorities need to have very solid evidence of the carrying out of the orders of a foreign subject, and that the materials collected to be given to that foreign entity truly contain a state secret." In Montyan's views, this is a test of the Ukrainian society's tolerance for such arrests, noting that "like Kotsaba, it's possible to accuse any Ukrainian with treason."

Ukrainian political scientist Konstantin Bondarenko noted that the ridiculousness of the story reminded him of an old Soviet joke: "A man was given 25 years for calling Khrushchev a fool. Why 25? Ten for insulting the first secretary of the CPSU, and fifteen for revealing a state secret."

Amnesty International Ukraine director Tatiana Mazur condemned Kotsaba's arrest on Tuesday, noting that "the [political] views of Ruslan Kotsaba can be judged in various ways, but in arresting him for his comments, the Ukrainian government is violating the fundamental human right of freedom of expression."

Ukraine Recruits 45,000 Draftees in First Nine Days of Mobilization
Andrei Losovoi, an assistant to Ukrainian Radical Party leader and parliamentary deputy Oleg Lyashko noted that Kotsaba was a "small fry", and that while "these must also be punished, it's absurd that he [has been arrested], while others remain free and feel very comfortable." Losovoi listed a number of Ukrainian politicians and businessmen opposed to Kiev who, presumably, in his view, also belong in prison.

Kotsaba himself has commented on his detention as follows, as cited by Ukrainian news site Podrobnosti.ua: "I said that I would be held to answer for my words, and I have been. I just wanted to note that this matter has brought a great deal of harm to Ukraine. I will go to jail, but I truly encourage everyone to trust me, as a war correspondent, that a fratricidal civil war is continuing in the east of the country."

Ukrainian Men Dodging the Draft by the Thousands

German Intelligence Estimates Death Toll in Ukraine Ten Times Higher
It is estimated that nearly 40 percent of the men who have been called up in the western Ivano-Frankovsk region have fled, with residents of neighboring regions such as Ternopil, Poltava and Zakarpattia also facing 40-60 percent desertion rates. Ukraine is presently attempting to mobilize a fighting force of nearly 103,500 over the course of 2015 in three waves. 75,000 Ukrainians are believed to have received draft notices in January. Over 7,000 people currently face criminal charges for evading military service, and people across the country have protested against mobilization in small groups, despite some regional authorities' threats that they would detain anyone attending such meetings.

Last month, Russian President Vladimir Putin hailed Ukrainian men's desire to escape conscription, including by fleeing to Russia, noting that Kiev would simply send them "as cannon fodder to face the bullets.

A recent UN report has estimated that over 5,400 have been killed and 12,000 have been wounded since the beginning of the conflict in eastern Ukraine in April 2014, while a German intelligence estimate believes the deaths figure to be up to ten times higher.