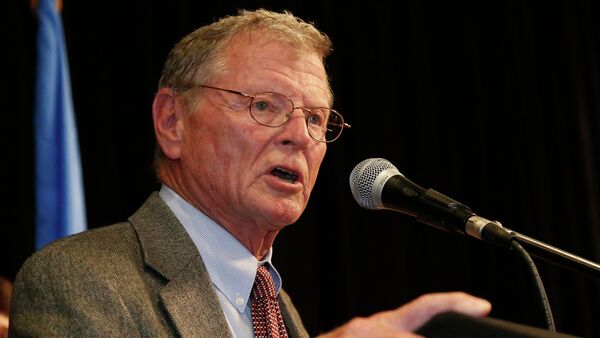 Senator James Inhofe said that US President Barack Obama should be granted authorization to use force free of any limitations, especially in terms of time and geography.

WASHINGTON (Sputnik) — US President Barack Obama should be granted authorization to use force free of any limitations, especially in terms of time and geography, in order to defeat the Islamic State (ISIL) extremists, Senator James Inhofe has said during a floor speech.

"AUMF [Authorization for Use of Military Force] should not contain restrictions on US forces, or time and geographic limitations," Inhofe stressed on Monday.

"An AUMF should authorize the use [of] all necessary and appropriate force anywhere where ISIS or any successor organization is operating until we accomplish our strategy," the Senator added.

Obama To Seek Approval to Fight ISIL
Over the past six months ISIL has expanded its control over vast areas in Iraq and Syria. The radical Sunni group continues to recruit new members into its ranks and the extremists behead and burn their hostages, Inhofe said, which is why the sanctioning of force must contain "all authorities" needed to execute a strategy to stop the terrorist group.

According to Inhofe, on January 23, US Chairman of the Joint Chiefs of Staff, Gen. Martin Dempsey said that all options should be on the table and military activities should not be constrained by time or geography because ISIL "knows no boundaries".

The Obama administration has relied on the use of force authorizations from 2001 and 2003 to legally justify US military strikes against ISIL targets in the two countries, where the extremists have proclaimed the establishment of an Islamic caliphate across areas under their control.