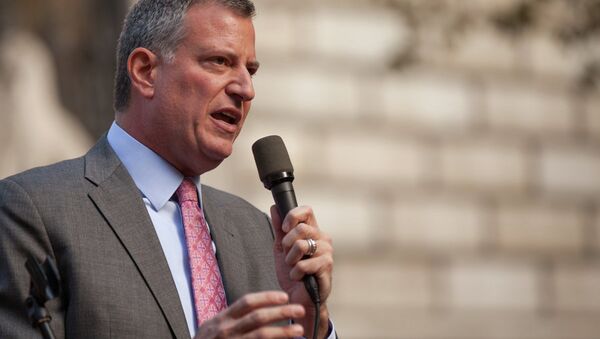 New York City Mayor said that the Number of New Yorkers collecting food stamps has doubled in the past decade.

WASHINGTON (Sputnik) — The Number of New Yorkers collecting food stamps has doubled in the past decade and comprises over one million households in 2015, New York City Mayor Bill de Blasio said during his fiscal year 2016 preliminary budget address on Monday.

“[The number of people] enrolled has more than doubled since fiscal 2002: 400,000 people back in fiscal 2002, over 1 million households now, and that is including more than 640,000 children in this city alone on food stamps,” de Blasio said.

Number of Americans Receiving Food Stamps Declines First Time in 7 Years
The mayor said that the statistics say much about what has happened to peoples’ incomes and their ability to make ends meet.

New York City is also facing a decrease in the number of middle class families, according to de Blasio. “For these families, that percentage that they make up of our city is down nearly 4 percent. That was about 29 percent in 1990, over 800.000 households now, down to 25 percent of our city’s population.”

The mayor attributed the decrease in the number of middle class families to the overall growth of the city’s population.

The number of people eligible for food stamps in the United States grew by 81 percent between 2007 and 2013, but started declining in 2014, according to the US Department of Agriculture.

Nearly half of all food stamp program participants are children, and 82 percent of all food stamp benefits go to vulnerable houses that include a child, an elderly or a disabled person, according to the Feeding America Foundation, a nation-wide network of food banks.