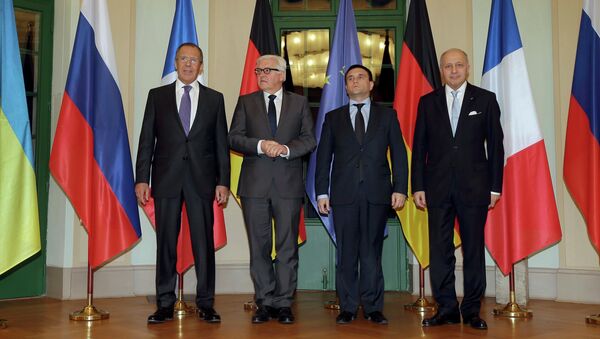 A diplomatic source said that the envoys from Russia, Ukraine, Germany and France have ended their talks on the Ukrainian crisis ahead of the Wednesday summit in Minsk.

BERLIN (Sputnik) – The envoys from Russia, Ukraine, Germany and France, countries that comprise the "Normandy format", have ended their talks on the Ukrainian crisis in Berlin ahead of the Wednesday summit in Minsk, a diplomatic source has informed RIA Novosti.

The meeting, held behind closed doors on Monday, lasted around 7 hours.

Fighting between Kiev forces and independence supporters continues in southeastern Ukraine and has intensified at the start of this year.

Talks on Ukrainian reconciliation have been held in several formats. The Normandy format was established in June 2014, when the leaders of Russia, Germany, France and Ukraine met to commemorate the 70th anniversary of the allied landings in Normandy, France.

Normandy format talks on Ukraine have so far failed to lead to any breakthrough agreements.

Lavrov on the Normandy Four Decision: This is Exactly What Russia's President Proposed
Meanwhile the Minsk Contact Group meetings on Ukraine, attended by representatives from Kiev, the self-proclaimed people's republics of Donetsk and Luhansk (DPR and LPR), Russia and the Organization for Security and Co-operation in Europe (OSCE), have resulted in a ceasefire agreement between Ukraine's conflicting sides, signed in September.

However, despite the truce, independence fighters continued to clash with Kiev forces, which launched a military operation in Ukraine's southeast last spring, in response to local residents' refusal to recognize the new coup-installed government.

Both sides have been trading blame for ceasefire violations that have resulted in heavy civilian casualties.