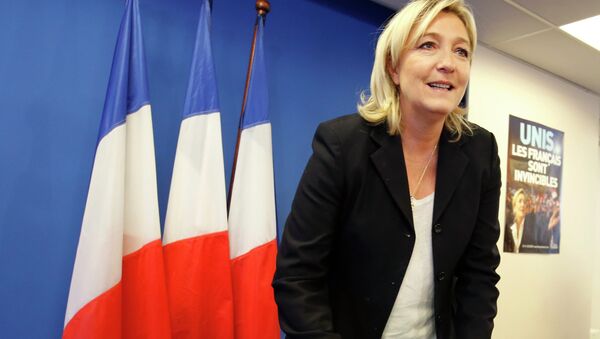 Marine Le Pen slammed the Ukrainian government's actions in the Donbas as a war crime and called for direct dialog with Russia to resolve the conflict.

"Today, it is the Ukrainian government which is bombing the civilian population," she said. "We are witnessing a war crime and no one is talking about this stark reality."

Le Pen also stated that the Ukrainian crisis is a result of NATO's expansion toward Russia's borders. In a critical rebuke of the organization, she stated that it had "Set the world on fire with Iraq, Syria and now Ukraine."

"When they say that they will deliver arms to Ukraine, what they want is war," Le Pen announced, deploring the idea of NATO countries supplying arms to the Ukrainian government.

To resolve the conflict, according to Le Pen, it is necessary to conduct negotiations on federalization rather than to solve the issue by military means.

Russia Not Treated as a Partner

Le Pen stated that she believes that Russia's President Vladimir Putin should be a partner, but he is not, as a form of cold war is being conducted against Russia.

"I do not believe in the presence of a Russian army in eastern Ukraine," she said, deploring the idea that Russia is a participant in the Donbas conflict.

For Le Pen, the root of the Ukrainian conflict comes from European politicians' refusal to end their dependence on the US.

For Greece, No Austerity Means No Euro

Calling the European Central Bank Germany's "boot," Le Pen said that the ECB's recent decision to cut off funding to Greek banks amounts to blackmail. Le Pen stated that only a return of economic growth can allow Greece to repay its debt, for which, according to her, the country must reinstate a national currency.