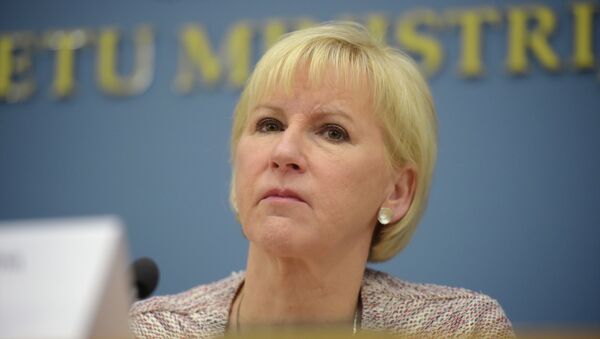 © AFP 2021 / ILMARS ZNOTINS
Subscribe
Swedish Foreign Minister Margot Wallström thinks that the European Union must be prepared for a "strong response" in the case that Hollande and Merkel’s initiative will fail to bring a political solution to the Ukrainian crisis.

Decision on Merkel-Hollande Plan to Be Made Within 2-3 Days – German FM
BRUSSELS, February 9 (Sputnik) – The European Union must be prepared to the possibility of expanding economic sanctions against Russia if the Ukrainian crisis does not improve, Swedish Foreign Minister Margot Wallström said Monday.

“I think we must be prepared. And if the talks fail, a very strong response is needed,” Wallström said before a meeting of heads of European Union foreign ministries.

The European Union implemented several rounds of sanctions against Moscow over its alleged involvement in the Ukrainian crisis. Russia repeatedly said that it is not a party to the Ukrainian internal conflict, and urged a peaceful dialogue between the warring sides.

“I think that today we’ll see the full support of Hollande and Merkel’s initiative so as to continue talks with [Russian President Vladimir] Putin and with Russia. This is the European way, to hold negotiations in order to find a political solution and not a military one,” Wallström said before a meeting of heads of European Union foreign ministries.

The next talks on Ukrainian reconciliation in the so-called Normandy format, comprising leaders of Russia, Ukraine, Germany and France, are expected to take place on February 11 in Minsk. The Ukrainian peace talks have been conducted in several formats to date, but none of the negotiations resulted in a long-term truce in eastern Ukraine.