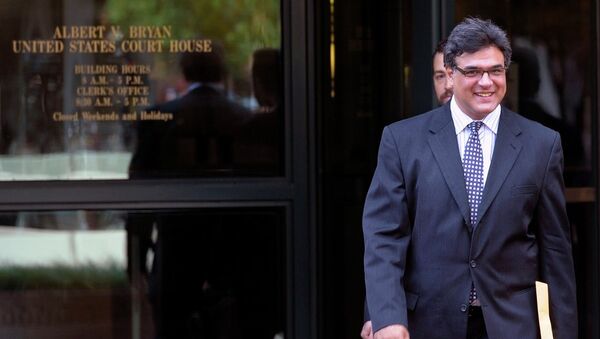 © AP Photo / Cliff Owen
Subscribe
John Kiriakou is out of prison two years after his conviction under The Espionage Act. In his first exclusive interview after his release, Kiriakou talked to Sputnik about torture, prison life and whistleblower protections and how torture committed by the CIA “was official U.S. policy.”

John Kiriakou was sitting alone when he got a package he had been waiting for for some time: a copy of the Senate torture report. It would seem almost a vindication of his work to expose the crimes of the CIA.

Except he was sitting alone in a jail cell, finishing out his sentence for doing the very thing U.S. senators were being hailed for.

The report revealed, in astonishing detail, how agents waterboarded suspects, deprived them of sleep, hung them by their hands for the ceiling while naked, and even how they forced them to eat pureed food from a method now known as rectal-feeding.

Much of the evidence of those events were contained in CIA correspondence Kiriakou had access to years ago through his high-level security clearance. Some of them, he may have written. At one time, Kirakou believed that such torture was a necessary evil. That eventually changed.

CIA Torture Whistleblower Released From Prison, Subject to House Arrest
Kiriakou is the only CIA employee to go to prison in connection with the agency’s torture program. His charge:  Violating the Espionage Act for revealing to the media and the public that the U.S. was torturing prisoners from the War on Terror.

He was just released days ago from a federal corrections facility in Loretto Pennsylvania where he was held for about two years and is now serving the remainder of his sentence at his home in Arlington, Virginia, by Washington, DC.

I Consider Myself a Patriot

Kiriakou, above all, considers himself a patriot and he always has. This patriotism led him to study Arabic, learn about the threat of terrorism and join the CIA. He earned several medals for his work there including the Counterterrorism Service Medal and the State Department's Meritorious Honor Award. Honor and sense of duty motivated him to support the government in its program of extraordinary measures.

“We were told the waterboarding was working, that it was not torture, that we were gathering actionable intelligence,” he told Sputnik. “I believed it. Everyone believed it.”

However, his sense of patriotism was also what pushed him to reveal what he came to see as crimes committed by the government against humanity.

“Several years later we came to know that wasn’t true,” he said. “We had all been lied to at the agency. Waterboarding was a terrible thing. It wasn’t good for the country. It wasn’t good policy. It was a mistake from the beginning.”

After information about waterboarding and torture started to leak and it was becoming clear to many the program had not been working, the Bush White House blamed the CIA, calling it a “rogue agency” and saying the torture was committed by “rogue agents.”

“As someone who faithfully and patriotically served in the CIA, I was offended that the White House would lie that way,” he said.

That’s when he went to the press to make clear “not only was the CIA torturing prisoners, that torture was ordered by the president and it was official U.S. government policy.”

His life changed. He was fired, friends stopped talking to him, and the FBI started investigating him — although he didn’t know it for three years.

“The FBI called me and asked if I would help on what they called a ‘counter-intelligence’ case,” he explained. “I had worked closely with the FBI for a number of years so I said sure, I’m happy to help. I went to a field office and sat with them in a conference room and it was an hour before I realized this investigation was of me not of some counterintelligence threat. That’s when I said I want to talk to an attorney.”

Kiriakou was charged with violating The Espionage Act soon after.

No Protections for Torture Whistleblowers

Many have asked why Kiriakou didn’t use internal channels or go to members of Congress to inform them about what was going on, but he did attempt to go “through the chain of command” but those channels were closed off

In 2012, President Obama appeared to start living up to his promise to protect whistleblowers in the federal government. New channels were opened up for employees of, say, the U.S. Treasury Department or major banks who see something so they can “say something.” However, the rules exempt the intelligence community.

“If you’re in national security, there’s absolutely no protection,” Kiriakou said. “You have to really give this a lot of thought before you decide to go public because everything in your life is going to change.”

Jeffrey Sterling May Not Be a Whistleblower, but He Shouldn’t Have Been Charged

Kirakou discussed also discussed the case of Jeffrey Sterling, another former CIA employee who was recently convicted of violating the Espionage Act, in this case allegedly revealing details about an operation to sabotage Iran’s nuclear program to New York Times reporter James Risen. Kirakou says that everything he has read about the case indicated that the government did not have a strong case.

“I did not see any evidence whatsoever that he had violated the law,” he said.

However, Kiriakou said the fact the case landed in the Eastern Virginia District helped the government. That federal jurisdiction “comes down like a bag of stones on members of the intelligence community charged with leaking information,” he explains, which is why the government wanted to try the case in the Eastern District despite the fact neither Sterling nor Risen lived or worked in Virginia.

Then there was the fact that, unlike Kiriakou, Sterling chose to fight the charges to begin with.

“He really believed, along with his lawyers — and he really had some of the best lawyers in DC — that if they could get in front of a jury and explain what happened surely the jury would see the light of day and acquit him,” Kiriakou explained. “He was convicted of all nine charges which convinces me that it’s true what they would say about how a jury will convict a ham sandwich.”

However, when asked if Sterling’s intentions mattered — the government has argued that Sterling merely sought retribution against an agency he believed mistreated him — he conceded that Sterling was probably not a whistleblower. Still, that didn’t mean he broke the law in the first place — especially under The Espionage Act, the same law Kiriakou was charged under.

The ‘Hammer’ of the Espionage Act

Kiriakou said the government uses The Espionage Act “like a hammer.”

In addition, he points to the government’s practice of trumping up charges in order to coerce defendants into copping pleas. Pointing to a ProPublica study showing that the vast majority of federal defendants — even well into the 90th percentile — never go to trial because they plea out, Kirakous says the number of charges he faced compelled him to take a deal.

“This is a problem in the american judicial system. What the DOJ does is heap on so many felonies, here I was facing 45 years in prison for talking about the torture program with a reporter,” Kiriakou said. “I would have died in prison. Then the government says ‘or you can take this deal, plead guilty to one charge and only spend two years in prison.’”

Kirakou thought about his family and his five children, three of whom still live at home.

“More than 2 years my family would have been ruined,” he said. “Eventually I took the plea just to make the whole thing go away, like the other 98.2 percent of people charged in this country.”

Even Minimum-Security Prison is Hell

Kiriakou’s experiences in prison often fell between the absurd and the tragic. All of his mail was screened, whether going in or out. That went against the policy he looked up for minimum-security prisons.

“I stupidly believed I had a little bit of privacy,” he said. “They sliced open my outgoing mail, sometimes very crudely and would sometimes even photocopy it and then reseal it with tape. The regulations are very clear that when a prisoner’s outgoing mail is being reviewed, he has to be informed in a letter from the warden. I was never informed. I would hear from people with whom I was corresponding.”

He talked about asking for approval to buy extra stamps to respond to the 8,000 letters he received during the two years he was in prison. He would be told he could buy them but when he went to the commissary, he was told he didn’t have approval.

That left him with the only choice to buy them from drug dealers.

“I tried to do it the right way; I tried to play by the rules,” he said. “But they wouldn’t allow me so I did what I had to do.”

At one point, while Kiriakou was in the infirmary giving blood, an inmate in his 70s came in clutching his heart, telling the woman working in the infirmary that he was having a heart attack. He called the response “depraved indifference.”

“He was clearly in distress and certainly of the age in which heart attacks are common but her response was, ‘you’re going to have to wait until someone gets here because I’m the only one on duty,’” Kiriakou recounted. “So he sat there in that wheelchair crying and clutching his chest in the midst of a heart attack until somebody finally showed up at work and determined he was indeed having a heart attack and called to him taken to a local hospital. The sad part is that’s typical. Nobody cares about you. Nobody cares about your health. Nobody cares if you live or if you drop dead on your way to the lunch line. If you are in your 70s or you have health problems, the chances are good you’re not going to make it out alive.”

Then there was the food. Prison food is often joked about but Kiriakou explains that it was often worse than a punchline. One time he saw a box labeled “Not for human consumption — feed use only” among the ingredients being served to inmates. Many meals only consisted of carbohydrates without any other nutrition.

All this has given Kiriakou a new perspective on the US justice system which he says is in need of real reform.

"One of the things you have to get used to is that you are going to be treated like scum," he said. "You are sub-human. You are not entitled treatment as a human building. So the so-called ‘corrections officers’ are going to treat you like the scum that they think you are and you have to take it. If you resist, you can be charged with 'insolence.' And insolence can be anything. If you're charged with insolence, you can get sent to solitary and solitary is hell."