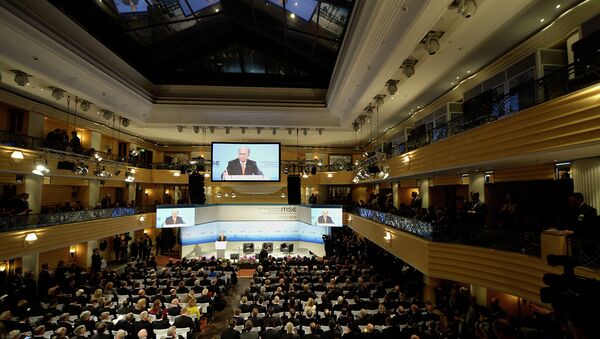 Andrew Korybko
All materials
The 51st meeting of the Munich Security Conference descended into a Cold War-like confrontation, as many Western participants adopted an anti-Russian stance that inhibited any useful dialogue.

The Munich Security Conference is in spirit supposed to be a friendly forum where global experts can gather to discuss cooperative solutions to the most pressing security issues of the year. A few significant events have transpired since the last time the event was held, from the Ukrainian coup and civil war to the meteoric rise of ISIL (to name but the most newsworthy), and the conference could have presented an historic opportunity to resolve these crises. Regrettably, the recalcitrant attitude and rhetoric of some pro-Western representatives spoiled the whole show, and the EU’s talks of peace in Ukraine amidst American calls for sending lethal weapons to Kiev were a simple good cop-bad cop dynamic meant to pressure Russia with an implicit ultimatum.

It’s All About Ukraine

In the week preceding the conference, the organizers released their first-ever Munich Security Report, which outlined a vague agenda for the participants to discuss. In short, it highlighted the Ukrainian Crisis, ISIL, and the tension around the South China Sea as this year’s global “hot spots”, thus guaranteeing that they would be addressed in some fashion. As it happened, however, the Ukrainian Crisis dominated the three-day conference, while the other two topics were largely neglected.

Munich Security Conference Closes in Bavarian Capital
A day before the conference was set to begin, it was revealed that Merkel and Hollande would be travelling to Kiev and then Moscow on an emergency visit to sell their still-undisclosed version of a peace plan to freeze the thawing hostilities. The worry was that without an immediate cessation of violence or a reversal of Kiev’s disastrous military fortunes, the US would decide to send lethal weaponry to Ukraine next week and thus exacerbate the conflict to epic proportions. Heightening the risk that this could happen, on Friday the US released its first National Security Strategy in five years and explicitly listed supposed “Russian aggression” as one of the main threats facing America today, thus possibly providing the ‘national security grounds’ for arming Ukraine. With this in mind, the Merkel-Hollande shuttle diplomacy begins to look more like a last-ditch ultimatum to Russia than a genuine desire for peace.

While the media reassures the public of Merkel-Hollande’s good intentions and reminds them of why Europe doesn’t need another war, the two EU leaders are really just the gentler, more presentable faces to the US’ aggressive threats. They and the US are under the false assumption that Russia is responsible for the reignition of hostilities in Ukraine (note: it isn’t; Kiev’s shelling of Donbass civilians is), and the idea goes that if they rush to Moscow with whatever ‘peace plan’ they can think of, Putin would accept it and call off the war because he’s so scared of American weapons entering Ukraine.

Security in Europe Can Not Be Reached Without Russia - Steinmeier
This absolutely false premise has already been disproven by the fact that the Russian President said that the upcoming Minsk meeting on Wednesday will only take place “if certain issues would be agreed upon by that date.” Obviously, Putin understands that whatever undisclosed ‘peace plan’ the EU is dangling in front of him is full of disadvantages for Russia’s strategic security and the physical protection of Donbass, hence why he didn’t take the bait when it was first presented to him on Friday. Russia doesn’t control the forces in Eastern Ukraine anyhow, so even if it agreed to an EU-sponsored proposal, it doesn’t necessarily mean it will be implemented.

Returning the focus back to the weekend’s conference, it generally entailed Western representatives condescendingly lecturing Russia, thus forcing the Russian side on the defensive and detracting from any opportunity for fruitful dialogue. Two dramatic anti-Russian speeches defined the event:

The Economist’s senior editor came off as a ‘journalistic Joe McCarthy’ when he tried spooking the crowd about the “Kremlin lie machine” that somehow “won the war in Crimea without really having to fire a shot.” Lucas is apparently under the misguided impression that his stagnated career will receive a second wind if he screams Russophobia (the Western zeitgeist), since this self-serving move has surprisingly proven successful for John McCain, whom many thought would have already retired from relevancy after his humiliating 2008 Presidential defeat.

Ukraine’s oligarch-in-chief took to the podium and waved around two handfuls of Russian passports, supposedly obtained from the phantom Russian Army that he alleges has ‘invaded’ his country for the umpzillionth time. Never mind that Russian servicemen hand in their passports upon answering the call of duty or that a secret ‘Russian mercenary’ conveniently dropping his ‘calling card’ at the scene of the crime is about as fishy as Kouachi dropping his at the scene of Charlie Hebdo, since Poroshenko was only using the supposed ‘passports’ as props to aid in his plea for American weapons.

Once more, this brings the conversation back to the topic of whether the US will arm Kiev or not. Merkel made a speech at the Munich Security Conference where she implored the US not to do so, saying that it won’t bring peace to the country. This was interpreted by most of the media as signaling a significant US-EU divide, but that’s not the case. Merkel has personal reasons for making a big deal out of preaching ‘peace’ since she’s rumored to want to be the next UN Secretary General and such a move is wonderful PR for a forthcoming campaign. The narrative that immediate peace in Ukraine can prevent American arms shipments to Kiev is actually a false choice meant to pressure Russia into a hasty agreement that can save Kiev’s forces encircled in Debaltseve, and it doesn’t reflect the reality of the situation.

Kerry Claims Russia Tries to Fundamentally Alter European Landscape
If the US wants to send weapons to Ukraine, it’ll do so with or without current hostilities in the country and regardless of Germany’s position on the matter. Germany has never told the US what to do – it’s always been the other way around – and Merkel has no realistic leverage such as a wiretap on Obama’s personal phone with which to pressure him even if she honestly wanted to. Supposing that the US opts not to directly send weapons to Kiev, it can always do so indirectly via close NATO allies Poland and Lithuania, which have already expressed an interest in selling armaments there, as well as the UK.

Also, Ukraine will likely not agree to any ‘peace proposal’ without first consulting its American headmaster, since it’s the US and not the EU that holds the cards in Kiev. There is the faint possibility that peace could ultimately be procured (with or without American weaponry being sent), but only if Merkel-Hollande genuinely understand that it is in the EU’s interests to see this happen and modify their ‘peace plan’ to sincerely accommodate Russian and Donbass security interests. This would, however, be going behind Obama’s back, and for that, Frau Merkel and Monsieur Hollande would have some tough explaining to do the next time ‘Big Brother’ calls.