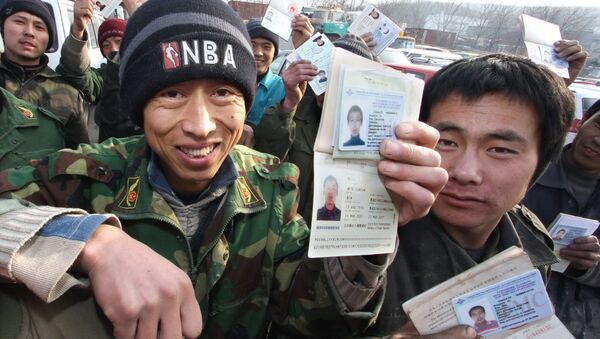 Speaking before the exp­­anded board of the Moscow Prosecutor's Office on Friday, Moscow Mayor Sergei Sobyanin noted that problems related to immigration have declined significantly at the beginning of 2015 compared with the same period last year.

"Problems related to immigration have always been of first priority in the city, up to last year; this year they have dropped to fourth or fifth place," Sobyanin noted, according to Rossiyskaya Gazeta.

The mayor explained that a successful effort by city and federal authorities to combat illegal immigration, together with new laws for migrant workers stepping into force January 1, have led to the positive changes.

Sobyanin noted that in 2014 in Moscow alone, over 200,000 illegal immigrants were either deported or rejected entry. New, tougher laws aimed at combating illegal immigration reward unregistered entry and residence with a five to ten year entry ban.

Beginning this year, Russia's old quota-based system for laborers was replaced by a new system, with people applying for what is known as a 'patent' to come and work. The cost of the monthly patent, effectively serving as a tax for the laborer, varies from city to city based on labor needs, costing 4,000 rubles (about $63 US) in Moscow, 3,198 rubles in Belgorod in the country's southwest, and 2,666 rubles in Kaliningrad in the country's west. In addition to the work permit, migrants must undergo medical examinations and purchase medical insurance or have it purchased for them by their employers. Employers must also make contributions into the Social Insurance and Pension funds.

Migrant laborers must also undergo testing of their knowledge of the Russian language, along with basic history and legal norms. Courses are offered in over three hundred locations on Russia, a third of them with the direct support of the Federal Migration Service.

Russia's FMS has counted a total of nearly 2.5 million migrant workers legally laboring in the country, with the number of arrivals dropping by 70 percent in early 2015 compared the same period in 2014.

Together with tougher legislation, the economic situation in the country has also played its role, with potential employers delaying projects which might require the use of migrant labor, while the devaluation of the Russian ruble puts a dent in the profitability of coming to Russia to work. In some cities, including Moscow, sectors of the labor force once dominated by immigrants, in areas such as public utilities, construction, trade and services have seen a surge of locals applying for the jobs as migrant laborers find them unprofitable.

As a whole, the recent reforms are aimed at improving the social protections granted to legal immigrants, and to make immigrant labor less attractive to employers compared to the local labor force. Rossiyskaya Gazeta explained late last year that before the reforms, in addition to the lower wages paid to guest workers, employers did not have to pay premiums into the pension fund, mandatory health insurance and social insurance funds –  premiums paid on Russian workers that made immigrant labor up to 30 percent cheaper.