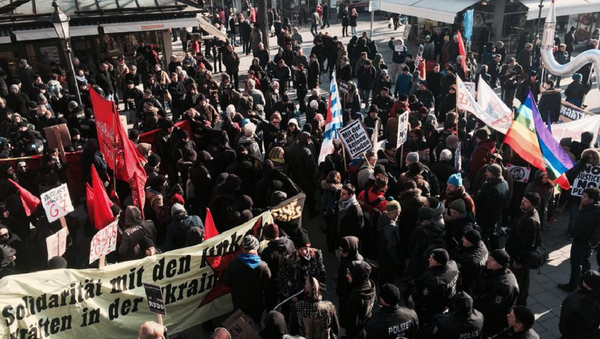 Protesters gathered outside the city hall in central Munich to demand an end to NATO aggression and to its confrontation with Russia.

MUNICH, (Sputnik) — Several hundred people on Saturday staged an anti-NATO rally in the Bavarian capital of Munich that hosts this week a major security conference, a RIA Novosti correspondent reported from the scene.

Protesters gathered outside the city hall in central Munich to demand an end to NATO aggression and to its confrontation with Russia.

Demonstrators carried placards that read "No NATO – No War" and chanted pacifist slogans.

"In the past years, NATO started loads of wars across the globe, and now it's Ukraine turn," a protester told RIA Novosti.

People said their hearts went out to those affected by the conflict in southeastern Ukraine. The United Nations estimates that more than 5,000 have been killed in the breakaway regions since hostilities broke out last April.

At least 200 people marched earlier on Saturday in downtown Munich in support of Ukraine, with some demanding the release of Ukrainian pilot Nadezhda Savchenko, who is awaiting a trial in Russia for allegedly killing two Russian journalists.

World leaders, top diplomats and security officials are converging in the German city for the annual Munich Security conference, which is dominated by the Ukraine conflict.