Most Japanese Support Non-Military Assistance in Fight Against IS 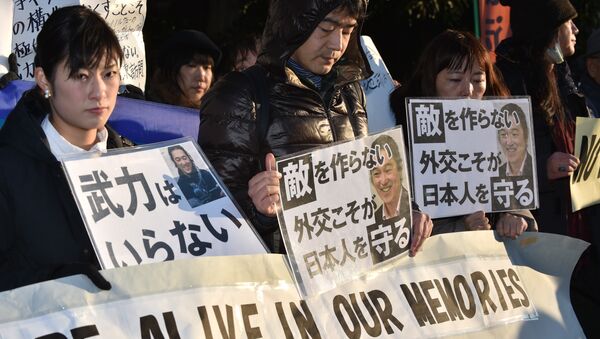 Almost 58 percent of Japanese citizens support non-military aid to the countries that are currently battling the Islamic State militants, according to a poll conducted by Kyodo News.

Japan to Strengthen Security in Its Schools Abroad due to Terrorist Threat
TOKYO, (Sputnik) — The majority of Japanese citizens say that the government's assistance to the countries that are currently battling the Islamic State militants should be non-military, a poll conducted by Kyodo News revealed on Saturday.

Almost 58 percent of those who participated in the two-day survey responded that Japan’s support should remain non-military, while about 16 percent favored logistical support to the US-led coalition performing airstrikes on IS targets in Syria and Iraq.

Only 2.8 percent supported Japan’s “direct participation” in military operations against IS.

In January, IS militants beheaded two Japanese nationals, entrepreneur Haruna Yukawa and freelance journalist Kenji Goto, in retaliation for Japan’s $200 million pledge in humanitarian aid for IS-affected countries, viewed as an act of war by the extremist group.

Japan’s PM Abe Condemns Killing of Jordanian Pilot by Islamic State
The executions came as a shock to Japan, which does not participate in military operations against IS. According to Japanese law, the country is constitutionally banned from engaging in military combat overseas.

Despite failed negotiations with the radical group on securing the release of the hostages, over 60 percent of the respondents believe that the Japanese government’s actions were generally adequate given the situation. More than half said Prime Minister Shinzo Abe should maintain his humanitarian pledge, particularly intended to help alleviate the Syrian refugee crisis. Almost 15 percent of the respondents believe the pledge should be abandoned.

According to the CIA, there are about 30,000 IS militants fighting in Syria and Iraq. The group controls large swathes of territory in both countries and has declared a caliphate in the areas it controls.