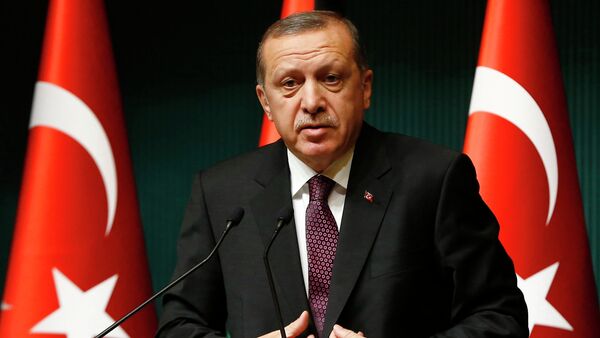 Speaking at a rally in Bursa, Turkish President Recep Tayyip Erdogan accused parliamentary opposition of being "ignorant" about the benefits of the presidential system, stressing it had secure control mechanisms.

Israeli FM Rules Out Normalization of Relations With Current Turkish Gov't
ANKARA (Sputnik) — In an attempt to increase his power to affect rapid reform, Turkish President Recep Tayyip Erdogan called on Friday for a shift to a presidential system.

Turkey is a constitutional republic with a largely ceremonial presidential post. Erdogan's former Justice and Development Party (AKP) has been rallying voters ahead of the June 2015 to get enough AKP lawmakers in the parliament to change the constitution.

Speaking at a rally in Bursa, Erdogan accused parliamentary opposition of being "ignorant" about the benefits of the presidential system, stressing it had secure control mechanisms.

Turkish FM to Stay Away From Munich Powwow Over Israel

He noted that a presidential democracy had a better chance of success due to its ability to make decisions faster.

"Look at the countries that can make decisions faster. The majority of them have a presidential system of governance. If we want Turkey to be among the 20 most developed countries, we must discuss this issue," Erdogan said.

At present, a president in Turkey is elected by the parliament. The backing of at least 330 parliament members is needed to amend the Turkish constitution. The ruling AKP party holds 312 seats.